Almost 30 thousand tweets were shared about the topic at two key moments: after the commemoration of the anniversary of Santa Cruz and when the city government removed the flag placed by the MAS.

There were opinion trends defending the wiphala as a national symbol, but also opposing opinions stating that it is a political symbol with little historical or national value, which developed last week in Bolivia and fueled the polarization faced by the country in the midst of a conflict of narratives about the events of the 2019 political crisis.

Context of the topic

As if there were not enough reasons for the polarization in Bolivia, there is now a clear confrontation between the social sectors that support the government and those that oppose it based on the wiphala, the flag representing the indigenous peoples of Bolivia.

In fact, the flag’s importance as a national symbol is quite recent and coincided with the rise of the Movement to Socialism (MAS) and its leader Evo Morales to power. Before 2006 – the year Evo Morales began his first term –, the flag was a symbol related to some indigenous peoples in western Bolivia and in some regions of South America. However, after the approval of a new Political State Constitution in Bolivia (2009), the flag was included among the country’s national symbols.

According to article 6, item II of the Political State Constitution, “the symbols of the State are the red, yellow and green flag; the Bolivian anthem; the coat of arms; the wiphala; the headdress; the kantuta flower; and the patujú flower”.

The introduction of various symbols in the Constitution is a recognition of the diversity of cultures and indigenous peoples existing in Bolivia and an understanding that the concept of nation, as a homogeneous unit, has been surpassed over the course of history.

However, the MAS has practically raised the wiphala to the level of party emblem, which led opposition sectors to believe that the symbol does not represent them, generating a debate about its legitimacy as a national symbol of Bolivia.

However, the wiphala is indeed a part of the identity of indigenous peoples, especially in western Bolivia, and is respected throughout the entire national territory.

Why the wiphala is being discussed

During the events related to the anniversary of Santa Cruz, the government prepared a schedule that included hoisting the country’s tricolor flag and the flag of Santa Cruz, but not the wiphala. In addition, the vice president of the state, David Choquehuanca, who was serving as interim president due to the absence of President Luis Arce, was not given the floor.

In turn, David Choquehuanca placed the wiphala flag over the tricolor flag and raised both flags at the same time. Almost immediately, two members of the Santa Cruz assembly removed the wiphala, folded it, and handed it to a military officer.

This act caused outrage within the MAS and inside the main government authorities, as well as a reaction by former president Evo Morales, who accused the Santa Cruz authorities of racism and discrimination, judging their attitudes and acting to defend the indigenous flag.

This analysis was carried out by tracking tweets posted between Friday, September 24, to Thursday, September 30, 2021, the period when the debate on this topic went viral.

The Newswhip, Trendsmap and Gephi tools were used to collect and compare the data and to analyze the results. The hashtags #wiphala and #whipala were used for this search, as both terms were used interchangeably.

Símbolo (symbol), pueblos (povos) and racismo (racism) were the most used words in the tweets shared between September 24 and 30.

The three words also express the opposing opinions regarding the topic, since the polarization happened between those who defended the value and importance of the wiphala as a symbol of indigenous peoples, demanding sanctions against racism and discrimination, against those who supposedly disrespected it. 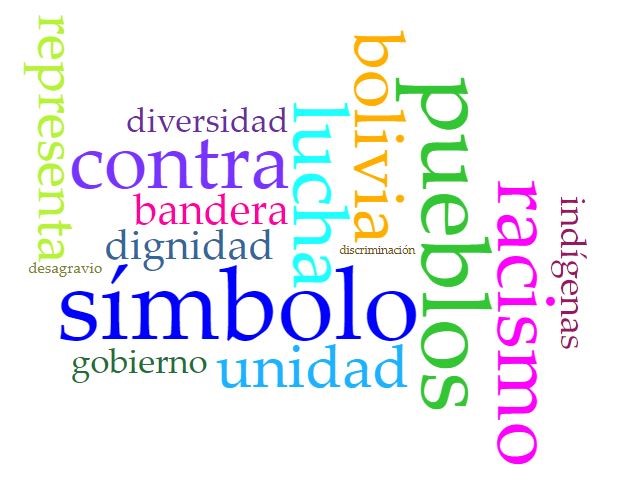 The most used hashtags on the social networks were #bolivia, #santacruz, #wiphala, #lawiphalaserspeta (the wiphala must be respected), which also represented opinion trends on the subject. The hashtags had different uses such as instruments of mobilization, visibility, viralization, among others. In this case, the hashtag #Bolivia seems to have been used as a way to promote visibility.

The number of tweets generated about the topic during the period analyzed reached almost 30,000. Regarding the origin of these tweets, Argentina and Venezuela also registered a high amount of traffic, although Bolivia was the country that concentrated the largest amount of tweets and retweets. 28% of tweets were generated in Bolivia, 14% in Venezuela and the rest in various other countries. However, it should be noted that geolocation tools are not as accurate as others. This problem happens because only a small portion of users activate the geolocation function. 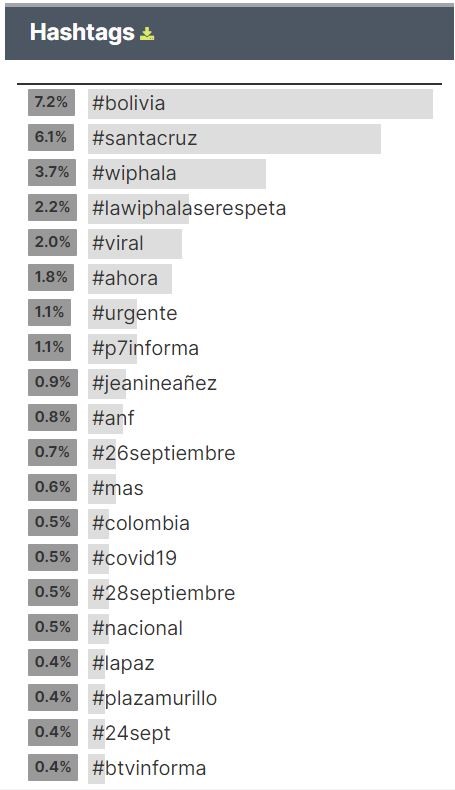 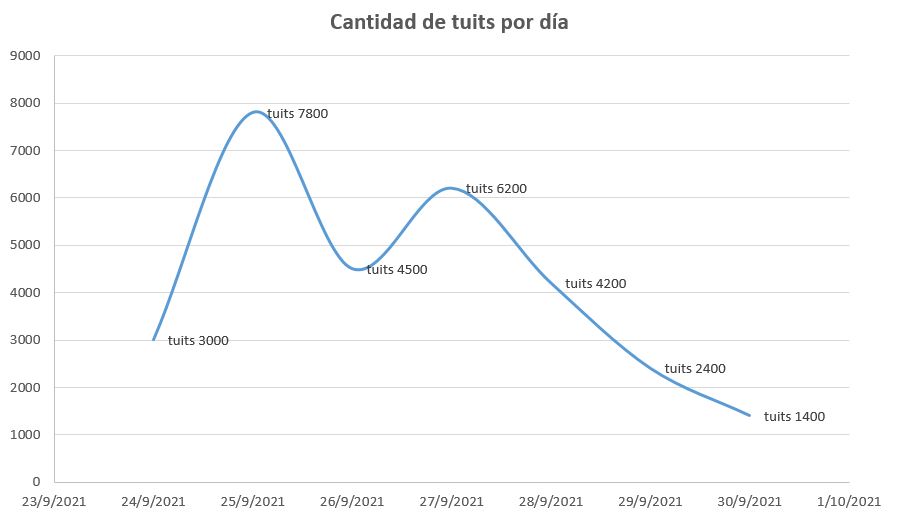 Tweets with the most impact

The most shared tweets, which caused the most impact, included a post by Evo Morales in which he championed the “defense” of the wiphala and its value as a national symbol, and a tweet by Bolivian President Luis Arce Catacora, who defended the flag as a symbol of unity, not division.

The tweets with the most comments were posted by the lawyer Freddy Camacho, the pro-government radio station Patria Nueva, the columnist Antonio Saravia, and an account of Emmanuel.ao. In three of these accounts – except for the Patria Nueva network – opinions were critical of the MAS for its political use of this symbol.

Among these accounts, five supported the government’s position, three are media outlets, and two are opposition politicians.

Considering the data obtained from TrendsMap, Gephi indicated that the most influential account in the debate regarding the wiphala on Twitter was Evo Morales’s: 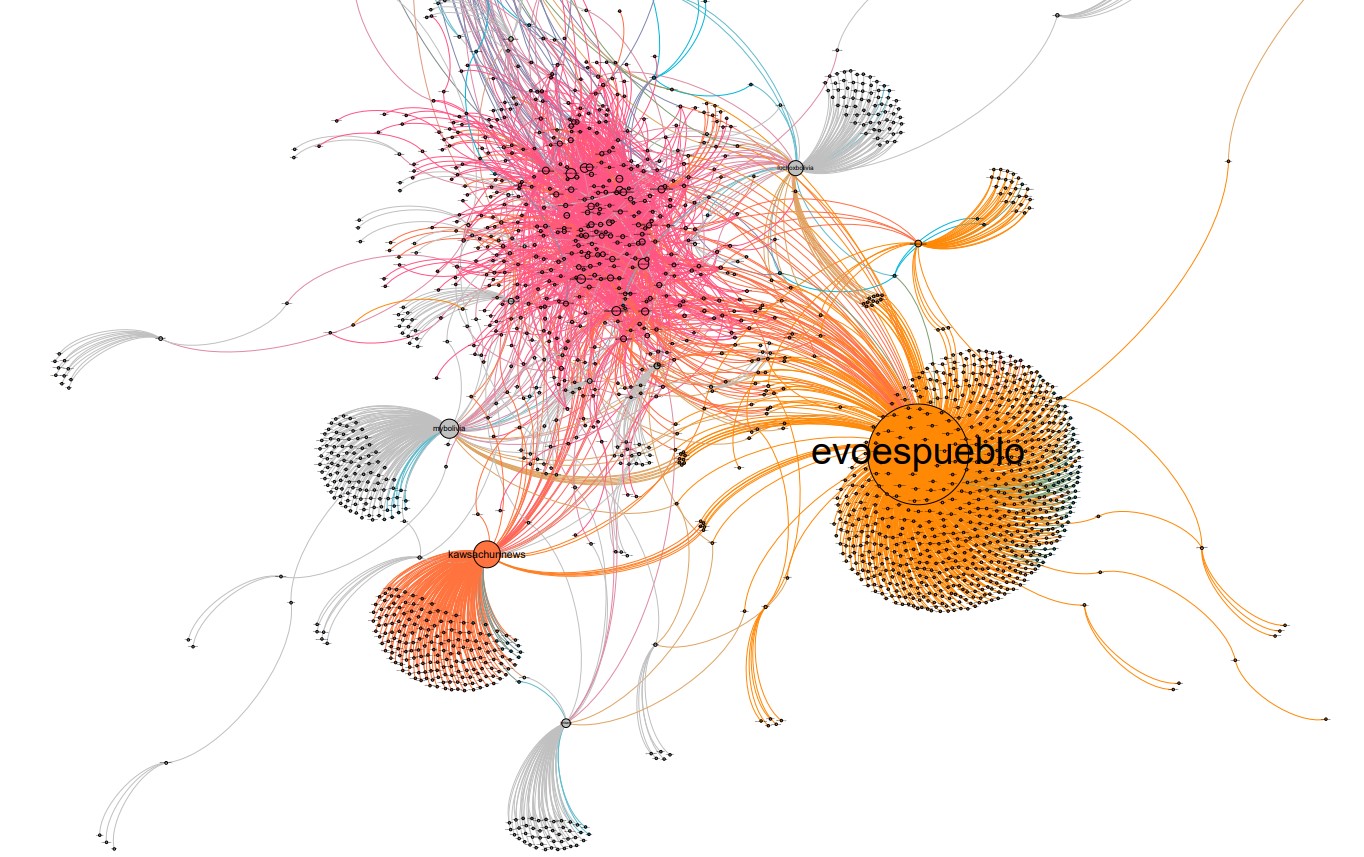