The #RappiFuga: Char and Gerlein go unnoticed by the radar

No need for a meme, as the protagonist has already made one. The internet was too late this time

The escape of former congresswoman Aída Merlano on October 1st looks like an episode made for social networks: a dental appointment which was actually a facade for the escape, a hidden rope, a jump from the third flood with a spectacular landing, and the escape on the motorcycle of a supposed delivery biker from the company Rappi. Drama, action, humor and innovation. And, of course, indignation. There is nothing left to the imagination as everything was recorded by the surveillance cameras. There is no need for a meme, as the protagonist has already made one. The internet was too late this time.

While Juanpis Gonzáles reenacted Merlano’s tumble, Rappi parodies emerged – a new “Rappi-favor”, the innovation of the “Rappi-fuga” (“Rappi-escape”) –, and a jingle inspired by the escape was produced, some politicians tried to politically exploit the situation. Others did not care. In the midst of the electoral race, the “Rappi-fuga” made only a shy appearance in the debates on Twitter. 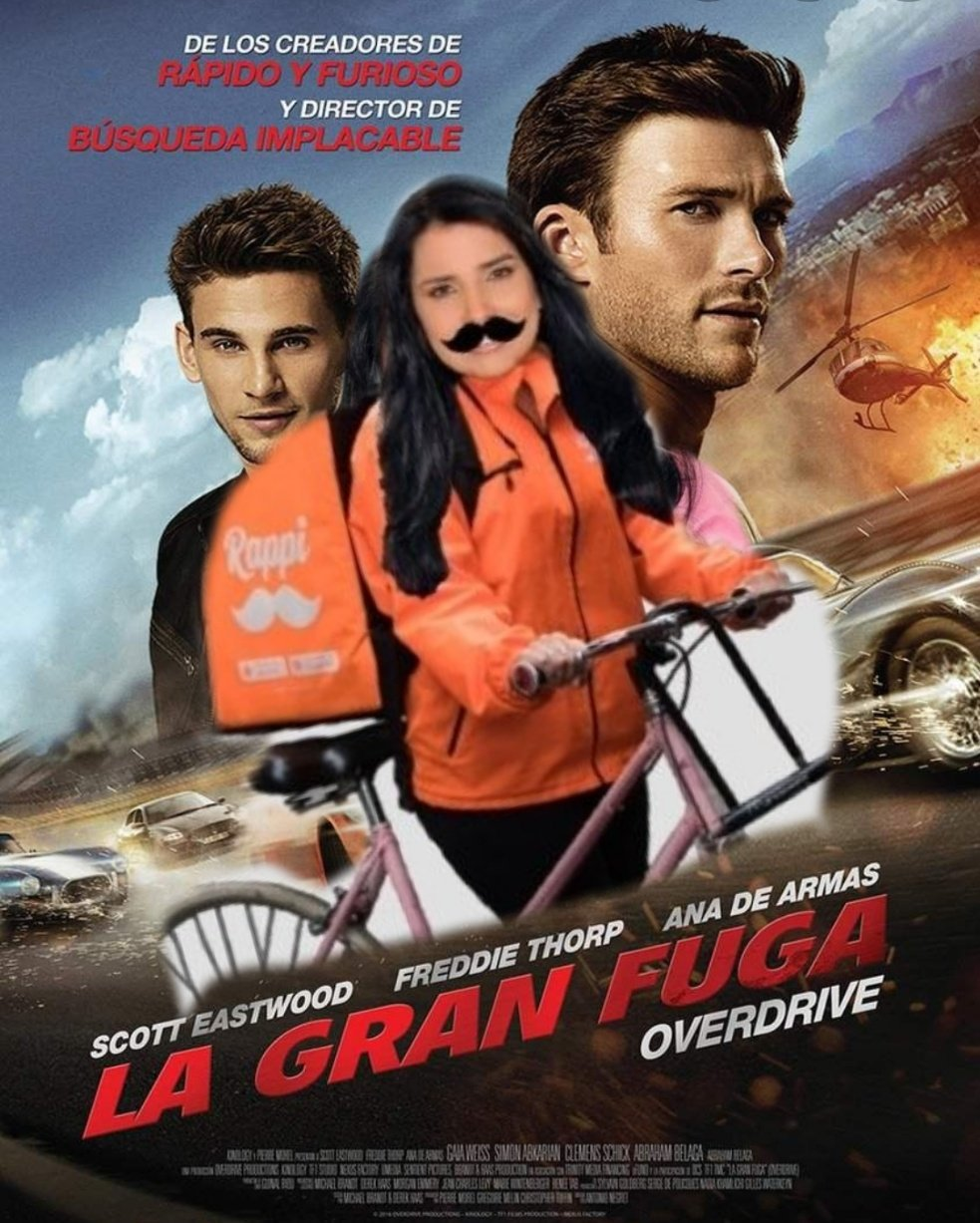 From September 12 to October 9, Linterna Verde’s* Digital Democracy Room registered around 420,000 tweets about the theme. Around 7% of them (28,500 tweets) had to do with Aída Merlano’s political mentors and allies: the Gerlein and the Char families. In addition, 5,900 tweets directly mentioned the Partido Conservador, to which Merlano still belongs. 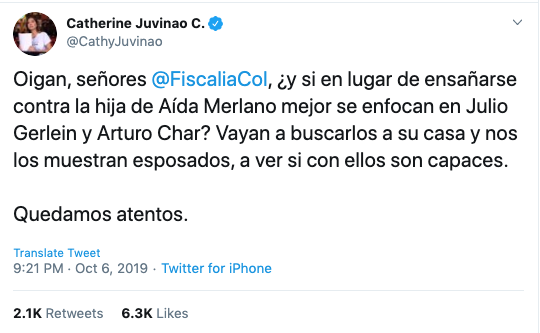 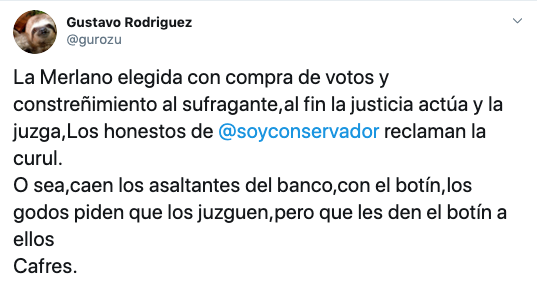 In September – a few weeks before the escape –, the Supreme Court of Justice sentenced Aída Merlano to 15 years in prison for buying votes. The decision was not a surprise for those who knew her trajectory (see this profile by La Silla Vacía). Merlano began her political career getting votes for conservative politician Roberto Gerlein on the streets of Barranquilla, and joined the Chamber in 2014 using the same method. Four years later, she joined the Senate with the support from the powerful Char clan.

The person who tried to capitalize the most on the political context in Costa Caribe – where Merlano’s electoral turf actually is – was Nicolás Petro, son of the leader of the party Colombia Humana and a candidate for the government of the Atlántico department.

Since September 14 – when the Supreme Court sentenced Merlano –, @nicolaspetroB has published ten tweets about the case (Figure 1). Nine of those tweets touch on Merlano’s ties with the traditional clans in the department, and five are directly related to the Char clan, even mentioning people by their first names.

By now, Petro Junior has already lost the election, specifically to the candidate coming from the Char family, Elsa Noguera. While Elsa’s voting intentions are higher than 70% according to the last poll, Petro’s are lower than 15%. The race for mayor in Barranquilla has a similar outlook: Jaime Pumarejo, the “political son” of Alejandro Char, has between 63% and 70% of the voting intentions.

Besides Petro, the tweets about Merlano were made by people with apparent political affiliation favoring the Colombia Humana party. The accounts which published the most tweets about the theme have published content supporting Gustavo Petro in the past. In fact, many of them show indication of being part of an artificial influence operation: they have alphanumeric usernames, profile pictures that are generic or taken from the internet, a daily average of more than 100 tweets, and more than 80% of their posts are retweets.

Determining exactly whether these accounts are bots or belong to bodegas – a term used to designate groups of people hired to produce content on the networks – is beyond the purpose of this analysis. The relevant point is that these apparently coordinated acts indicate an attempt to create a digital debate starting from accounts related to Colombia Humana in order to enable a political event around Aída Merlano’s escape and her evident connection with the political clans in Costa Caribe.

Other candidates in Atlántico, such as Rodney Castro (for governor) and Diógenes Rosero (for mayor), also joined this attempt, probably in an independent and spontaneous manner. Castro retweeted the coverage from the portal La Silla Caribe about the theme, while Rosero insisted on accusing Merlano’s political allies. However, the “Rappi-fuga” was ignored by the regional political class, especially by those closest to the Char clan.

On the national level, some influencers focused on Merlano’s political connections. As seen in the ranking of most shared tweets on October 1st, the day of the escape (Figure 2), the most influential users exposing Char and Gerlein were Pirry and Catherine Juvinao, who is from Barranquilla, but built her career in Bogotá. 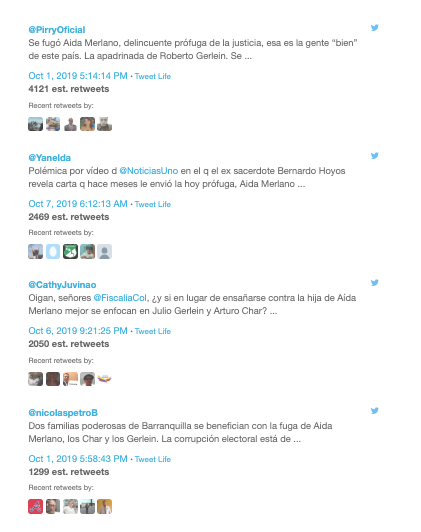 Although the conversation happened mostly in Bogotá and Barranquilla (Figure 3), the most retweeted messages did not reach the Caribe region as much when compared to other cities. This indicates that the topic did not seem to prompt a debate among the voices in that department. 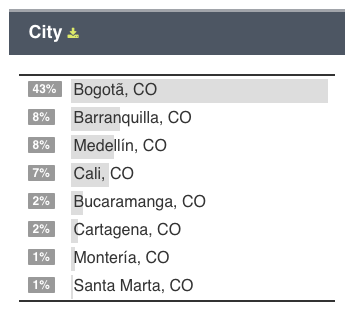 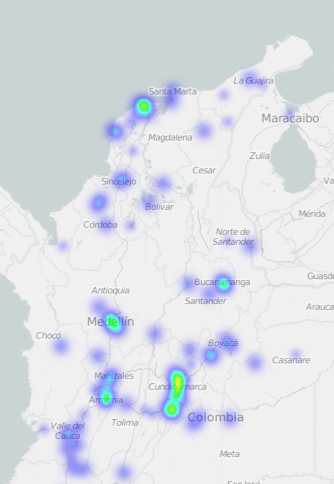 The “Rappi-fuga” is not a minor story. The Char family clan is the regional political project with the widest national reach, and Merlano’s conviction points directly to the way this group forged its power and influence. However, among memes and parodies, the episode became fast food for the internet and was consumed by the whole nation – just like the episode of the fake monja uribista.

It is impossible to know whether this debate was stronger offline than on Twitter. Neither can we rule out the possibility of it having some impact on the local elections: the indignation runs in deep waters. For the time being, Gerlein and the Char, as well as the Char’s political allies – Pumarejo and Elsa Noguera –, have a clear strategy: if you look for the words “Aída” and “Merlano” in their tweets, you will find absolute silence.

* The Digital Democracy Room is a project of Fundação Getulio Vargas in Brazil in association with Linterna Verde, and its goal is to monitor and analyze the discussions on social networks regarding the electoral context.