Although this was not the first time that this group of Chilean searchers has entered Bolivia to recover stolen cars, the documentary produced by the Megavisión channel highlighted not only the lack of control and permeability of the country’s borders, but also the complicity of the authorities with the illegal entry of stolen vehicles into other countries.

Two news stories were presented by Megavisión Chile on their website and on social media pages entitled “The lucrative business of criminal gangs: Part 1. The recovery of stolen cars in Bolivia”; and Part 2. “Theft of cars bound for Bolivia”.

In both stories, a group of journalists decided to document the vehicle recovery tasks of the NGO Grupo Búsqueda de Vehículos (GBV), led by a former Chilean police officer who, according to his own statements, recovers an average of eight vehicles per month in his country as well as in Bolivia, although this implies – in his words – higher expenses with transport and other costs.

The two stories were shared on the social network pages (Twitter, YouTube) of the Chilean channel and spread from there quickly, reverberating in Bolivia and causing police officers to be fired and sending a former commander to jail.

Statistics of the news story

Part 1: Theft of cars bound for Bolivia: The lucrative business of criminal gangs https://www.youtube.com/watch?v=0rXxt-eUAWc, published on Monday, May 2, 2022, obtained 195,532 views, 3,308 likes and 633 comments on the website Megavisión Chile in just three days.

Part 2: Theft of cars bound for Bolivia: The lucrative business of criminal gangs https://www.youtube.com/watch?v=723_QpxpxGk, published on Tuesday, May 3, obtained 161,461 views, 3,446 likes and 756 comments on the Megavisión Chile website in just two days.

On Facebook, the first part of the content was published on Tuesday, May 3, obtaining 30,000 reactions and seen by 1.8 million users. 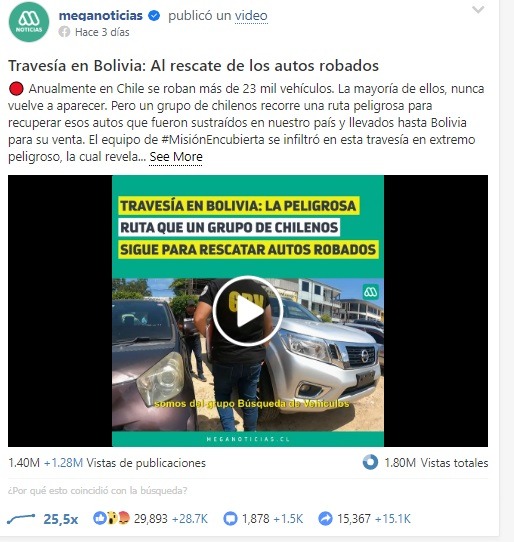 The second part was published on Tuesday, May 4, obtaining 24 thousand reactions and seen by 901.4 thousand users. 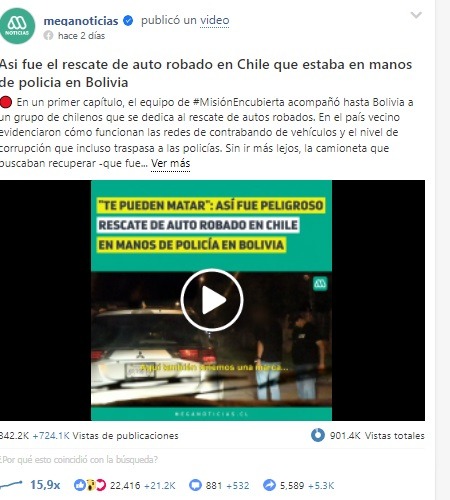 While in Chile the stories produced by Megavisión had large repercussion, in Bolivia there was a media scandal that affected the agenda of communication vehicles and caused reactions and political responses.

In the first three days (May 2, 3 and 4), 1,113 posts were made on Bolivian Facebook accounts (from different media and user fan pages), with more than 100 thousand interactions.

The reactions happened in pages and accounts of authorities and groups of the elected party, the opposition and especially the media, where an intense debate took place that culminated in a government response to intervene in the Directorate for the Prevention of Vehicle Theft (Diprove) of Santa Cruz, not before laying off all of its employees.

in the pages of government authorities and groups, content related to the topic was published 91 times and more than 1,500 interactions were published.

Content on the topic was published 111 times in opposition pages and groups, with hundreds of interactions.

According to Buzzsumo’s analysis, after the Chilean story was released, 200 reports were published in Bolivia with the word “stolen cars”. The communication vehicles that produced the most content were: Página Siete, Opinión and El Deber.

The Bolivian news reports with the highest performance on social networks were the following: 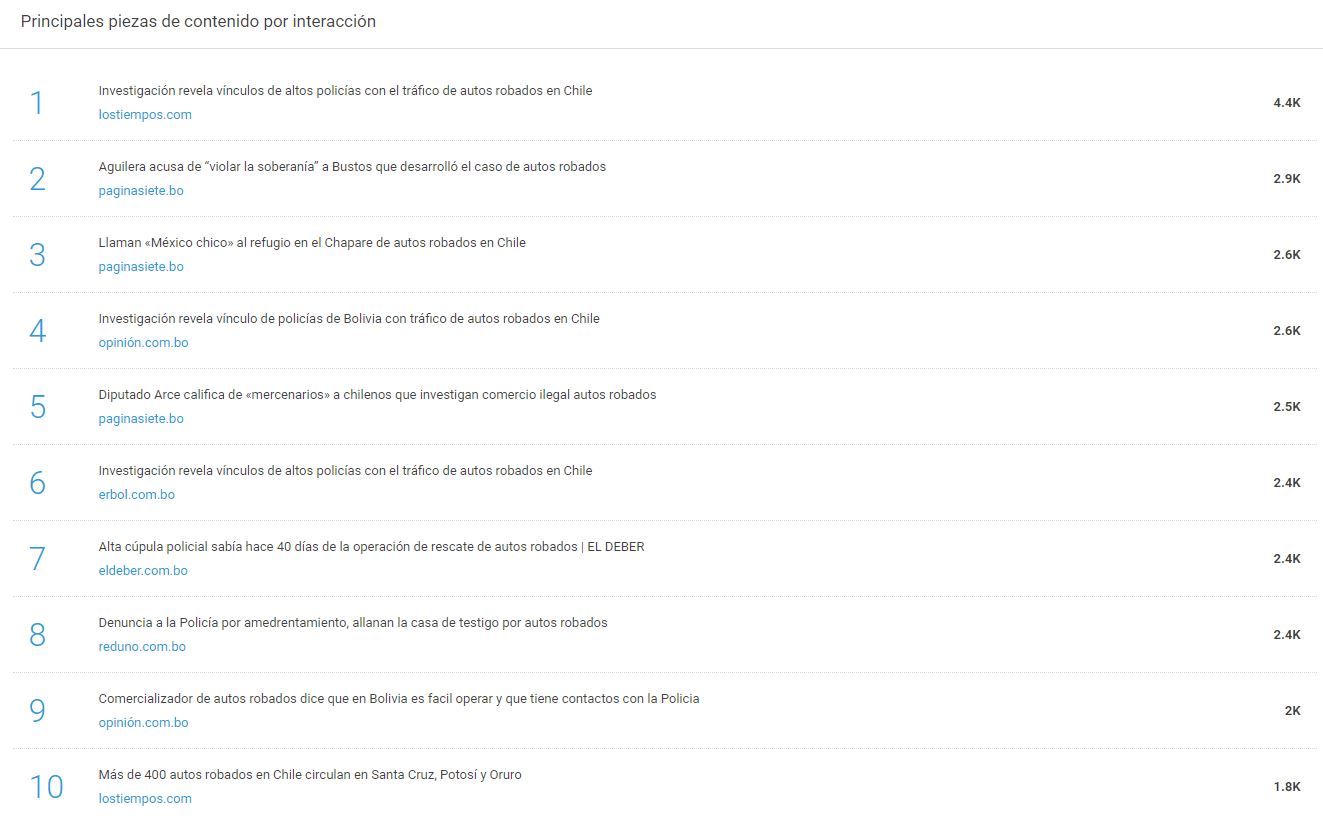 The analysis tool also indicated that users used the term in their search for information.

After the publication of the report, the former commander of the Border Police, Colonel Raúl Cabezas, was arrested and taken to the Palmasola prison, accused of misuse of influence, unjust enrichment, receipt of proceeds from corruption crimes, and favoring unjust enrichment. The audiovisual analysis revealed that Cabezas was the owner of the stolen vehicle that the Chileans recovered from Bolivia.

The case led to the intervention of the Directorate for the Prevention of Vehicle Theft (Diprove) in Santa Cruz, and Colonel Carlos Alcázar was appointed to replace Juan Carlos Bazualto as part of the directive to fire all police officers.