After the World Health Organization declared the Covid-19 pandemic, more than 172 thousand interactions, including tweets and retweets, were generated in Peru in two days. 68% of the messages focused on the dissemination of the virus or other issues unrelated to preventing the infection

A qualitative analysis of the reactions on Twitter to the declaration of the global coronavirus pandemic showed that two thirds of the messages or interactions on the network about the topic increased fear or tensions about the advancement of the disease, including news with data presented as alarming, but containing no useful information on prevention or recommendations to fight the crisis, while the number of cases in Peru have reached 38 according to recent official reports.

OjoPúblico gathered 172,300 tweets and retweets referred to the Covid-19 between March 11 and 12, after the pandemic declaration, which coincided with president Martín Vizcarra’s announcement of extraordinary measures to deal with the emergency at the national level. After analyzing a representative sample, we determined that 68.66% of the content published did not provide useful information for the population, despite the official efforts to avoid stress and speculative actions.

The sample, gathered through the Brandwatch tool, covered the period from Wednesday, March 11 at 6 a.m. until Thursday, March 12 at 5 p.m., based on research criteria with keywords referring to the coronavirus, Covid-19 and the WHO pandemic announcement.

After analyzing the content, we divided the messages collected into three categories: relevant information with recommendations to avoid the dissemination of the coronavirus and preventive measures adopted by the governments (31%); tweets with data about the impact of the coronavirus or dramatic comments about its dissemination and consequences (31.85%); and irrelevant messages such as jokes, fake news or abstractions (36.81%).

According to the analysis by OjoPúblico, which is part of the Digital Demoracy Room (DDR) project, the announcement of the pandemic produced up to 995 tweets every 5 minutes in Peru at around 11:50 in the morning on March 11. This means the peak of debate about the coronavirus was 199 tweets per minute in the first day after the pandemic announcement, according to data from the Trendsmap platform.

There had already been a peak of interactions a few minutes prior, after the television message by president Martín Vizcarra to announce the first extraordinary measures to contain the advancement of the coronavirus. These announcements included the suspension of classes in schools and the isolation of travelers coming from Europe and China, resulting in 877 interactions every 5 minutes, or a peak of 175 publications per minute.

The analysis with the Brandwatch tool shows that March 12 was the day when the majority of the content regarding the Covid-19 was generated during the current month. The data provided by Trendsmap is similar. There was a peak of interactions last Thursday at 1:45 p.m. with 2,515 interactions every 15 minutes. This coincided with the press conference given by president Vizcarra, in which he confirmed that 22 people had been infected by the virus until that moment and announced new measures adopted by the government to contain the coronavirus outbreak. One day later, the official number indicated that there was 16 more infected.

The major hashtags used in the debate were #Coronavirus, #Covid19, #coronavirusperu, #covid_19, #coronavid19 and #pandemia, and the most frequent words were “coronavirus”, “pandemic”, “peru”, “covid”, “measures”, “cases” and “classes” according to the Trendsmap.

REJECTION. One of the hashtags generated on Twitter about the Covid-19 was #BastaDeHisteriaCollectiva (No more mass hysteria). The hashtag reflected the criticism that prevailed on the social networks regarding the increase in supermarket bulk shopping.
Source: Brandwatch.

Criticism of the government

OjoPúblico also analyzed the reactions and what was said on Twitter about the government’s ability to fight this crisis, particularly regarding president Martín Vizcarra. Almost 50% of the comments about the topic were criticism of the president of the Republic, of the Ministry of Health or the EsSalud (Peru’s Social Health Insurance), according to the qualitative analysis of more than 38,693 interactions registered since March 6, when the coronavirus appeared in Peru, until last Thursday, March 12.

The criticism was centered on the fact that the president of the Republic led the press conference to announce the existence of the first Covid-19 patient in the country, but he did not mention measures to eradicate violence against women, the dengue fever epidemic and other issues.

This group also showed criticism of the delay by the Executive Branch in taking and announcing preventive measures, as they were taken only 5 days after the confirmation of the first case in Peru.

Around 35% of the messages were neutral or informative about the measures taken by the government, and only 8% of the interactions corresponded to users supporting president Martín Vizcarra’s performance. 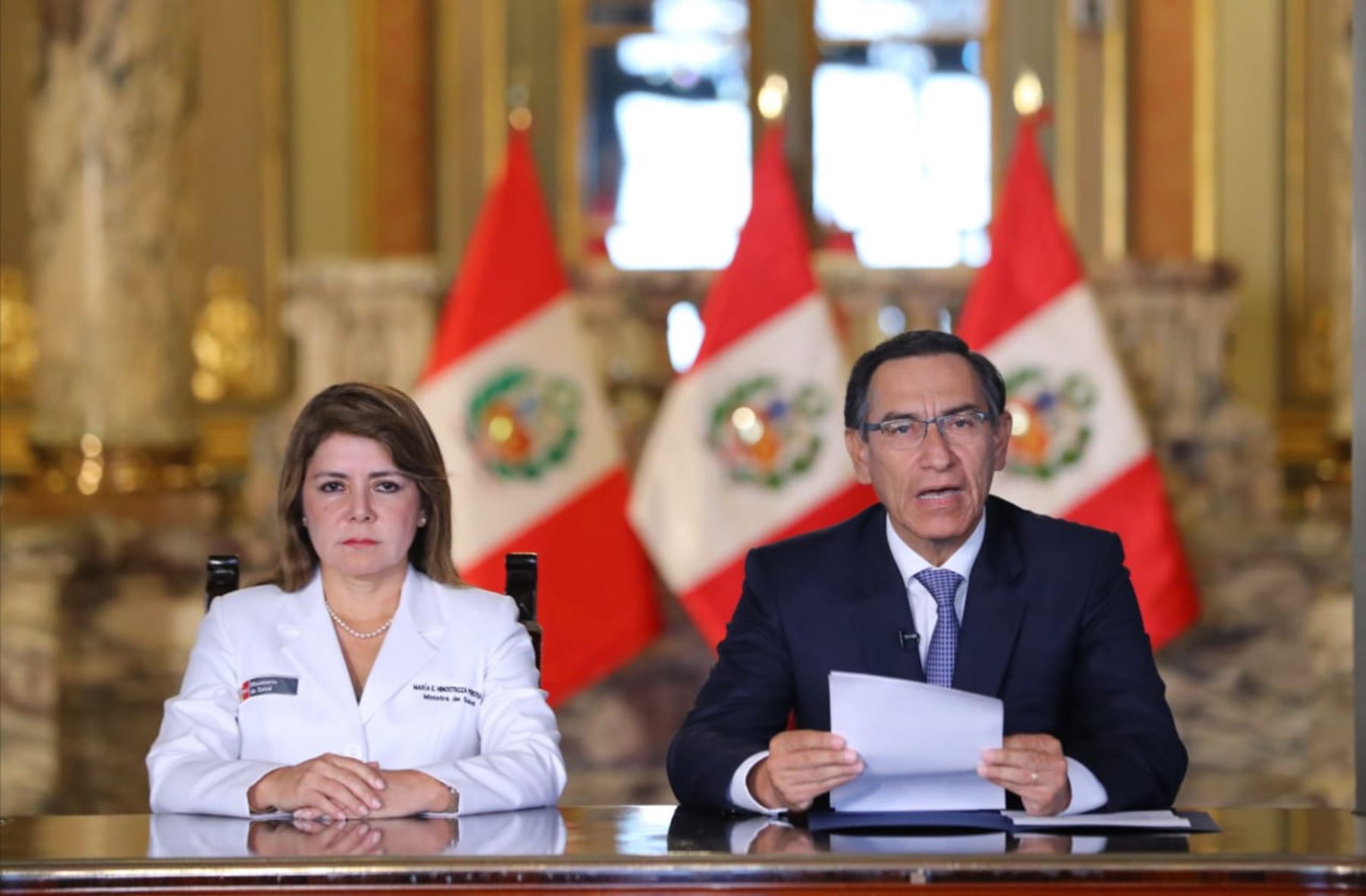 CRITICISM. Almost 50% of the mentions to president Vizcarra were critical to his actions to control the dissemination of the coronavirus. The questions regarded the announcement of the appearance of the Covid-19 in Peru.
Source: Andina.

Since the first coronavirus was reported until last Thursday, the news about bulk shopping and scarcity in shopping centers prompted 18,871 interactions on Twitter, with discussions peaking on Thursday, March 12, with more than 13 thousand tweets and retweets.

According to the qualitative analysis of the Digital Democracy Room, based on a sample with 95% reliability, 52% of the debate on Twitter about this phenomenon condemned this practice. This was also evidenced by the hashtag #BastaDeHisteriaCollectiva, which was the main trend about the topic according to the platform Brandwatch.

The publications that followed this discourse included asking the major supermarket chains in the country to restrict product sales per client. The reaction on the networks led the company Cencosud, responsible for the supermarkets Wong and Metro, to establish restrictions for buying disinfectants, antibacterials and toilet paper. Supermercados Peruanos S.A., the operator of the supermarket chain Plaza Vea, also made an announcement on the social networks, but only to encourage their clients to buy responsibly.

On Twitter, 10.2% of the content in this debate was composed of reports of empty shelves in shopping centers, with photos and videos, while 14.4% was composed of comical content about the panic created in users.

The uncontrolled shopping incidents led president Martín Vizcarra and the Minister of Health Elizabeth Hinostroza to ask citizens to remain calm and to inform about the implications of a declaration of a sanitary emergency.

“The warehouses of the shopping centers and production companies are well stocked. The entire productive chain is in perfect condition and continues to produce. There will be no scarcity because this emergency has not damaged our productive infrastructure, compared to other situations. So please remain calm […]”, were the words of Martín Vizcarra.

The analysis is available the website of Ojo Público here.