#MeDecidíPorClaudia vs. Petro: the pending debate about the power of women

The alliance between Ángela María Robledo and Claudia López was a political event with some staged interactions on social networks. First, there was a debate between the two on Twitter – seemingly spontaneous at times and coordinated at other times; then came a Facebook live broadcast in which the alliance was formalized through the hashtag #MeDecidíPorClaudia (I have chosen Claudia), and finally came the massive attacks and criticism from the accounts who follow Gustavo Petro.

Linterna Verde analyzed the 36 thousand tweets that were part of this digital conversation between October 10 and 14, and found out that the messages against Robledo e López were used as arguments about politicians and public policies (the metro, Peñalosa, Fajardo). However, there is an obvious debate for these narratives that Petro’s followers seemingly tried to avoid: with the union between López and Robledo, a crisis has consolidated inside the Colombia Humana party around women’s power and role in decision-making.

In her announcement, Robledo said she wanted “a woman’s campaign”. That was a very direct hint she dropped for Gustavo Petro and Hollman Morris; she moved away from them in beginning of August after several women accused the latter of domestic abuse and sexual harassment in the beginning of the year So far, there has been no court decision against the candidate due to these accusations.

On August 27, Robledo led a list of 50 women close to Petro, who invited him for a meeting about “the contradictions that our project Colombia Humana has been facing around the contributions of feminism to society”. Tweet: Dear @petrogustavo, the contradictions faced by our project Colombia Humana around the contributions of feminism to society have motivated a large group of women to call for a direct meeting with you.

We look forward to a date for this meeting.
*Photo*

The meeting happened on September 5, but there was no agreement. Petro carried on with his support for Morris, and that wound remained open. The former presidential candidate even tried some discursive acrobatics by saying that the subway is a gender policy. (Disclaimer: he did so as a reply to Carlos Cortés, cofounder of Linterna Verde). Tweet: The journalist is the one who’s biased: did he forget that the current transport system in Bogotá enables the harassment and aggression of hundreds of thousands of women every day?

That improving this system with the metro is actually a feminist demand?

The metro is sacred for @petrogustavo. That is why any alliance is pushed aside and blocked. What about the serious claims of harassment and aggression against women?  Well, that issue is less important. With this, he is showing support for @HollmanMorris. Long live the Colombia Humana.

Before recognizing the “elephant” inside the party, the accounts close to Petro spent their time mentioning, in more than 15 thousand tweets, the connection between Claudia López and Enrique Peñalosa and Sergio Fajardo, and the discussion about the elevated railway. In addition, when they touched on the gender issue, they made light of it, accusing Robledo of promoting “false feminism” and “class feminism”. This is what we found: Reply: Mrs. @angelamrobledo didn’t move away, she aligned herself with the peñalosismo [the group supporting Enrique Peñalosa], with the elevated railway, with Peñalosa’s POT [Territorial Ordering Plan], with the 20 trunks owned by TM [TransMilenio, a BRT-like transport], with the TM at the Séptima [one of the main routes in Bogotá]. @ClaudiaLopez Don’t take us for fools. We won’t be fooled. We stand strong with mayor @HOLLMANMORRIS.

2. Attacks related to the elevated railway start to appear. This topic is a red line for Petro, Morris and their followers. Peñalosa outsourced the project last Thursday, and the green candidate says it is irreversible, but the Colombia Humana believes there is corruption in the elevated railway, and that it is less advanced in terms of studies than the subway Petro developed in his administration. 13.5% of the messages studied mentioned this topic. Tweet¹: Oh, I love you, Ángela, you helped me solve the dilemma, and the truth is that Claudia disappointed me, but you need to work on your basics #MeDecidíPorClaudia. I admire your independence.

Reply: You’ve decided for the corruption in the elevated railway and Peñalosa. Congratulations.

Tweet²: We are going through decisive moments for Bogotá and our responsibility to the city as free citizens must be conscious. It’s time to speak up.

Reply: We have another Manguito.

I wonder if a position was offered?

I wonder if there is a contract involved??

Something good must have been offered in exchange if someone used to say they were against corruption and then suddenly they start supporting a corrupt metro.

Most frequent words in the tweets
Does not include empty words
Graph Individual words vs. Frequency 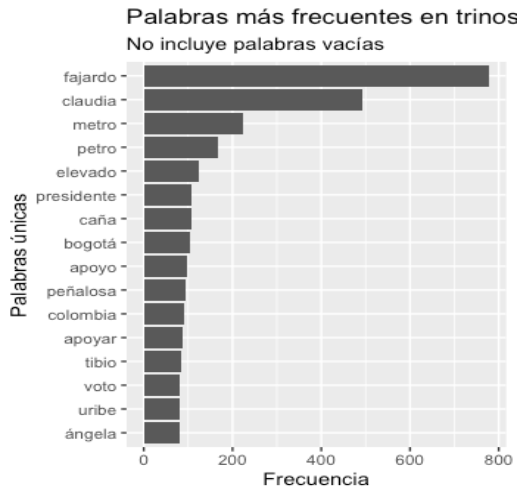 Tweet: I cannot forget the time when @ClaudiaLopez supported the Colombia Humana for the Presidency to make a dream of change come true in the country.

Campaigns bring out the best and the worst in us; people attack her and call her a peñalosista, when the true peñalosista wears red and claims to be independent.
Reply: But Ángela, it was really evident that, in @ClaudiaLopez’s
highest moment,
she rejected any agreement and despised the
@ColombiaHumana_
she had neither criteria nor character and then started losing votes! She listened to the Tibio (the Soft one), and because she wanted to walk over him, we will have no metro, no Bogotá.

4. Petro’s followers try to move the focus away from the arguments about gender and disqualify Ángela Robledo’s feminism. It is an undeniable fact that the public statement opened a wound in the Colombia Humana, and feeding the discussion is like pouring salt in that wound. The alliance between López and Robledo only made the crisis more evident.

Most of these tweets are around a discussion about the type of feminism Robledo represents, and they are made specifically in order to attack her. They say, for instance, that her feminism is false, or that it is “extreme”. This is the kind of attack that tries to nullify other people and other opinions. Some other messages even criticize Robledo for using feminism as a political banner. Photo 1: Women have destroyed Bogotá by placing a false feminist ideology above the interests of the city.  This is the kind of feminism that supported Penãlosa in the past and now supports Fajardo.

I cannot forget the time when @ClaudiaLopez supported the Colombia Humana for the Presidency to make a dream of change come true in the country.

Campaigns bring out the best and the worst in us; people attack her and call her a peñalosista, when the true peñalosista wears red and claims to be independent.

Photo 2: Oh, dear lady, seriously, I need to exercise my self-control to avoid offending you. In your case, MANY don’t believe a single word you say. Your heart is GREEN and your feminism is FANATICAL, EXTREME, CONDEMNATORY AND VILE. Do you want to continue with the Colombia Humana? That will finish DESTROYING YOU.

Analyzing the most frequent words appearing together with “feminism” or “feminist” makes it clear that this word is normally used as a criticism or insult ([class, careerism, falsehood, among others]). 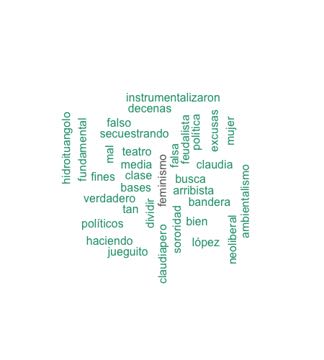 It is not clear whether the attacks are a deliberate strategy to overshadow López’s candidacy or whether Petro’s followers are really in denial when confronted with the issue of feminism defended by the Colombia Humana. Maybe it is a little of both. The truth is that, after the elections, this movement will need to look at itself in the mirror and tackle this problem.

Claudia López may become the first female mayor in the history of Bogotá. If that is the case, e support of Ángela Maria Robledo will have been decisive. One week before the election, the difference between López and Carlos Fernando Galán is within the margin of error according to almost all polls.

To think that the criticism to this alliance between the two women may be defined simply as the candidate’s proximity to politicians – men – and her distance to the subway project – defended by a man – is to skate around the problem. Classifying Robledo’s feminism as opportunistic is equally wrong.

In this digital conversation, we see the elements that women-led projects face. By trying to impose their own interpretation and narrative in this episode, Gustavo Petro and his followers show that they understand nothing. Photo 3: Do you think this is an improvement? This means that if you support @ClaudiaLopez you are definitely not with the CH (Colombia Humana), you may go and defend the elevated railway with them

#Compartir convincing @angelamrobiedo that the elevated and the subway are at the same level, giving merit to Peñalosa, minimizing that there are 2 bidding proposals and will take it to the end, but @HOLLMANMORRIS @petrogustavo @GNavasTalero @GustavoBolivar don’t like the studies.

Photo 4: Supports Claudia, who supports Fajardo (who supports Uribe and Peñalosa), but also wants to continue working with the CH. And don’t even mention the flying metro. 😡 You’re very confused, mrs. incoherence.

* The Digital Democracy Room is a project of FGV DAPP in Brazil in partnership with Linterna Verde, and its goal is to monitor and analyze the digital conversations regarding the electoral context.