In less than two days of the statement of the coca grower leader, his words were altered and circulated with virality in various social networks. Although the content was widely disseminated, the strong impulse of amplification was given by a tweet from the governor of Santa Cruz, Luis Fernando Camacho.

Measuring the impact of disinformation is no easy task. While some social networks provide numbers about the scope of a photograph or video, many times these figures do not reflect the real arrival of false or misleading content. For example, on many occasions, the same phrase comes to be captured in different images that sneak through Facebook, jump to Twitter and circulate on WhatsApp despite its falsehood. From there they settle into popular narratives that resurface in conversations..

The case of the assembly of the statement of Arnold Alanes attributed to Page Seven is a clear example of how the ecosystem of disinformation is configured.. Not an isolated case, it happens more or less the same with the content that daily denies Bolivia Verifies.

Falsehood always – or almost always- has some link to a real event. Lies are the correlate of truth. In this case, the origin of the content was a Facebook post made by the newspaper of La Paz, collecting the statement of the coca grower leader, Arnold Alanes.

The post was made on Friday 15 October 2021 to the 14:23 hours. Alanes, who had just inaugurated a warehouse to operate a market for the commercialization of coca in Urujara, claimed that the Government did not put “nor 10 cents” of the 800.000 dollars that cost the land and assured that -before any investigation- could show that the funds came out of contributions.

Half an hour later the statement was altered and the claim that the money from the purchase came from contributions was added to the sentence., “sale of jellies and raffles of cakes”. The phrase was changed on the Facebook page”Potosina Resistance”, itself that has content opposed to the Movement to Socialism. While the text was altered, the original image of Página Siete – with its logo and the photo of Alanes- remained, so, falsehood was tinged with credibility by using the name of a newspaper. 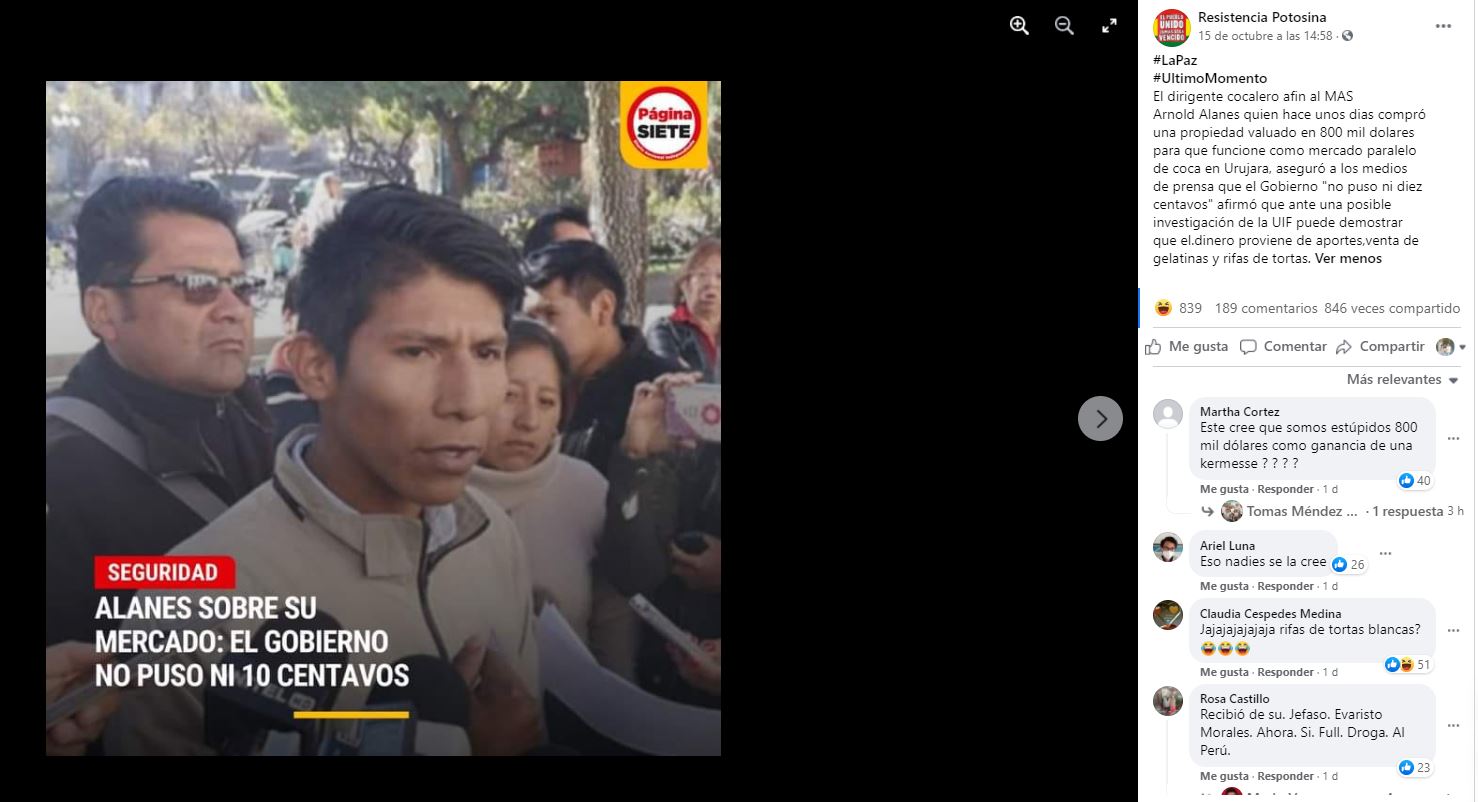 Altered post that used the image published by Page Seven

The post jumped from that page to various opposition-leaning Facebook groups.. According to Crowtangle’s analysis the content reached a potential of 730 thousand people in two days. 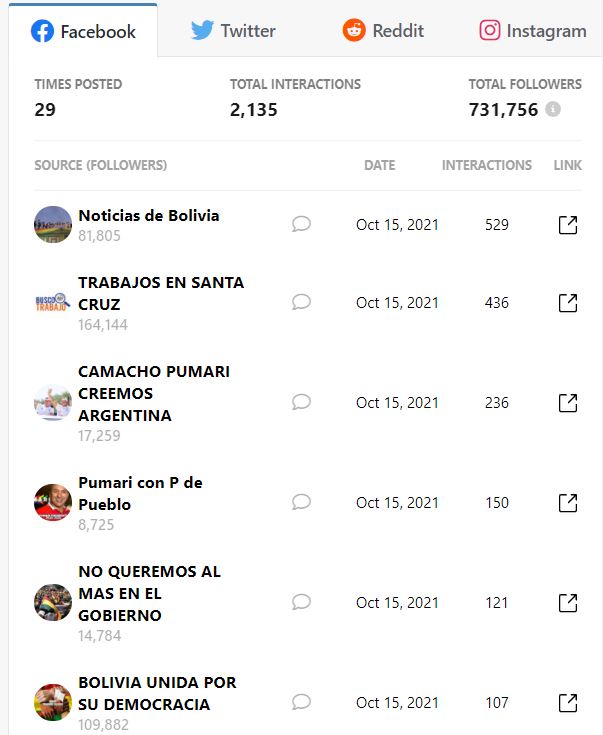 This is just the beginning of the flow of the fake content, the capture of the post began to be shared with the cut image, in which the name of the issuing page no longer appeared. The image was composed only of the altered statement and the actual image of the Page Seven publication.. Ideal ingredients for cooking misinformation: unsused phrases and media names used without authorization. Below you can see how the capture was cut to infiltrate it more fluidly: 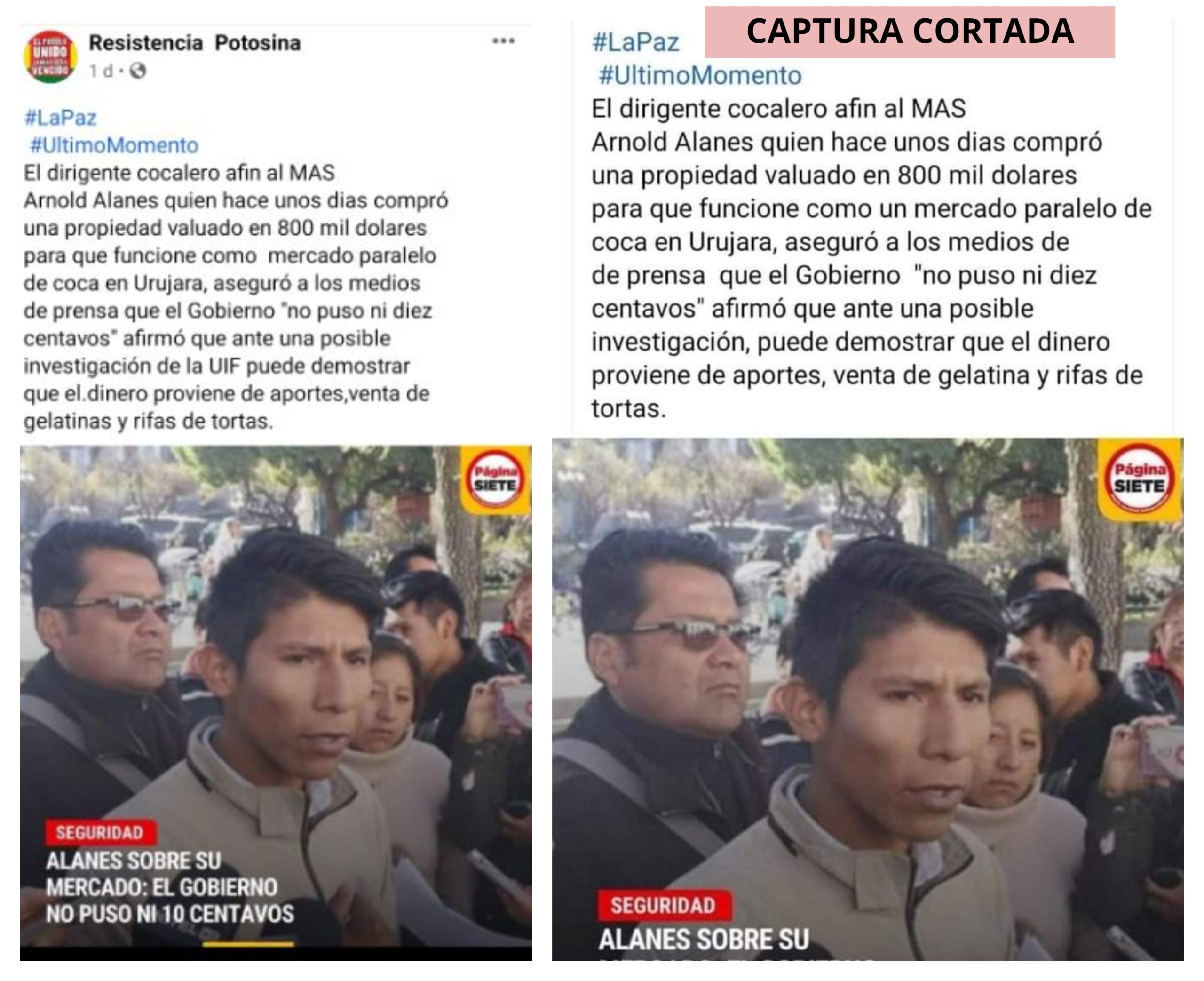 In this way the false content began to circulate on WhatsApp where the alert was generated indicating that it was “forwarded many times”. This attributed, according to a research of the verifier “Maldita”, represents a high percentage of hoax probability. “The 78,72% of the contents associated with the Frequently forwarded attribute that we track (…) they end up pointing out hoaxes or disinformation” . 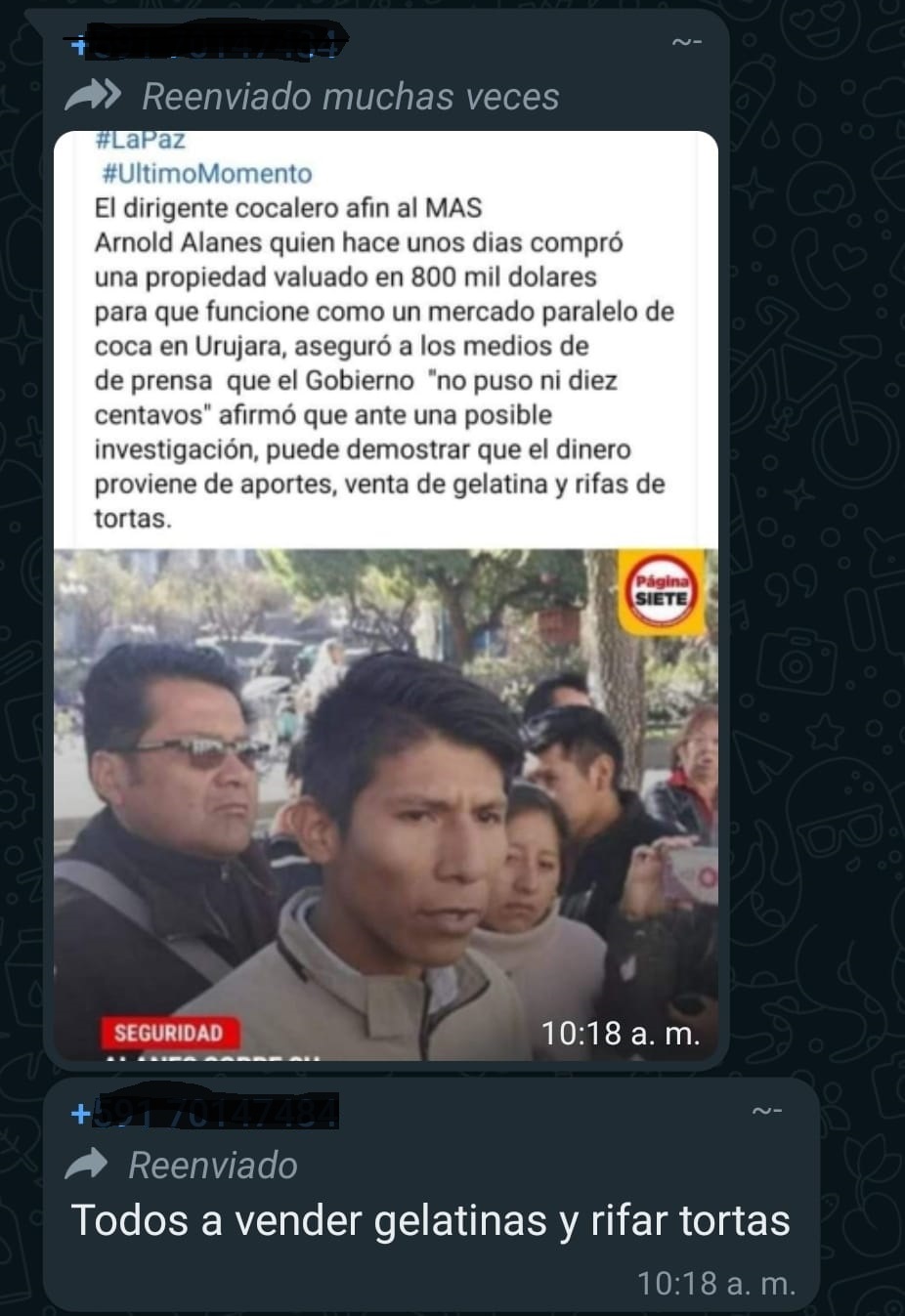 While virality had already been achieved, the fake image received a further boost after it was shared on Twitter by the governor of Santa Cruz, Luis Fernando Camacho.

The authority shared the image in a mocking tone pointing out that it should be put to sell gelatin to public servants to pay the foreign debt. The tweet was published by averaging the 17:43 Hrs. Saturday 16 October, one day after the actual newspaper post. 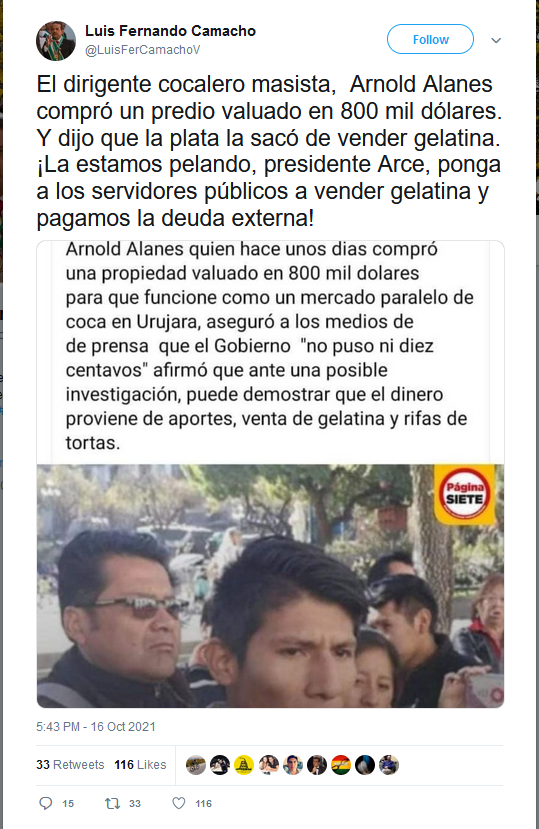 Four hours later and through their networks, Page Seven alerted its readers that it was fake content. Camacho deleted the tweet but it had already generated repercussions in other areas. It was replicated for example by the page “Behind the Truth” and on the portal “Networking” where the text was transcribed in its entirety.

It also had arrival in Facebook portals, as “Santa Cruz Breaking News” where Camacho’s response was rescued by placing him in the center with a photo of him and leaving aside the false image that started everything. 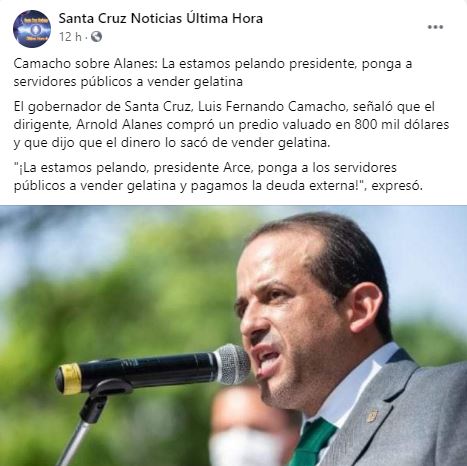 That content – according to Crowtangle- reached in nine hours a potential of 155 thousand users on that social network. 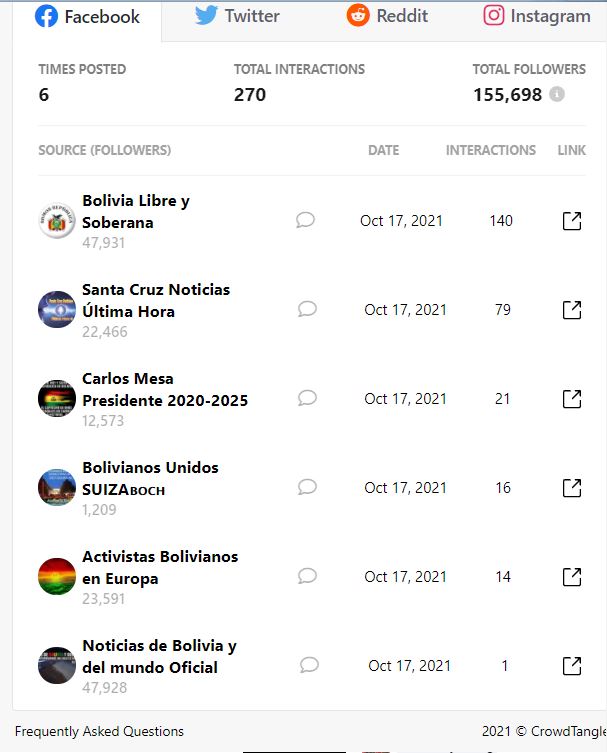 According to an investigation carried out in Colombia the year 2020, there are bad habits regarding the consumption of the messages we receive. According to the document, one 46% of respondents in a survey admitted to sending content received “immediately” without confirming the source. This gives us an alert about how disinformation can be viralized fleetingly and jump without much effort from one social network to another.. This helps to understand how a real phrase could end up in a viral hoax about contributions., gelatins and raffles, no way comical or implausible it may seem.