Frepap’s new leap: from a slow campaign to a whirlwind on the social networks

The analysis by the Digital Democracy Room indicates that the political group increased their visibility on twitter by more than 500% in a single day after the preliminary results of the 2020 elections, which placed them among the most voted

After a political campaign going against the grain and focused on the physical networks, the Agricultural People’s Front of Peru (Frepap), the second strongest force in the new Congress – based on 99.09% of the minutes processed and 85.82% of the minutes accounted for – is considering officially joining the social networks in the digital world, while a whirlwind of apocryphal accounts vies for representation. The apparent disorder might indicate internal discrepancies according to information collected by the OjoPúblico for the Digital Democracy Room. After the preliminary results became known last Sunday, the references to this group on Twitter increased by more than 500% on the voting day, compared to the references happening during the process that started with the presentation of the lists on November 18.

According to tweets collected through the digital tool Brandwatch, which was used to analyze a sample of 29% out of 1,279,889 publications regarding political parties, Frepap had generated only 6,900 interactions until January 25. However, on the election day, January 26, the discussion around the Israeli party increased five times by exactly 523%.

The increase of the discussion on Twitter about this party had three important milestones. First, a peak was registered at 4:10 p.m. on January 26, after the release of the first electoral public opinion poll by the research company Ipsos Perú, which placed Frepap as the political group with the most valid votes (7%). At that time, an average of 1,056 tweets were generated every 15 minutes according to the data collected with the Trendsmap tool.

A second key moment happened at 8 p.m., after the broadcast of the fast tally up to 100% by Ipsos Perú, which gave Frepap 8.9% of the valid votes, making it the second biggest political force in the new parliamentary composition. The results increased the indicator to 2,276 tweets about the party every 15 minutes.

The third large debate about the group happened on the election day at 10 p.m. It happened five minutes after the Twitter account @FrepapPeru, one of the accounts claiming to speak for the party, published a tweet criticizing the comparison made by the virtual congresswoman Martha Chávez about the similarities between Frepap and the Fuerza Popular. This publication was the most retweeted in the debate on the networks about Frepap, with more than 2,500 retweets and 11,772 ‘like’ reactions until the night of January 27.

According to the Trendsmap tool, 1,959 tweets about the party were produced every 15 minutes at the peak of the discussion out of the 80 thousand tweets made between January 26 and 27.
The account @FrepapPeru was created recently, on January 26 at the end of the day. 24 hours after its creation and with less than 25 tweets made, this profile obtained more than 18 thousand followers, and according to the Brandwatch platform, its publications obtained almost 3 thousand tweets in a single day. By the end of this analysis, the account already had more than 21 thousand followers. Although some communication vehicles attributed this account to the political party, its authenticity started being questioned as the hours passed.

“That’s not an official account that can issue opinions or transmit information from our center”, explained Susan Tineo Ccaccya, a Frepap spokesperson and the national youth secretary since August 2019, as informed by the Infogob website.

The transition of the Israeli party into the social networks happened among a whirlwind of contradicting versions about its representation. At least five Tweeter profiles have been identified as supposedly official Frepap accounts: @FrepapOficialPe, @FrepapO, @FREPAP_, @FrepapPerú, all of which were created in the last month. The oldest, @FREPAP1989, was created in May 2019.

Inside this group, the account @FREPAPPeru was the most retweeted and obtained the most replies according to data obtained with Trendsmap. There is also an account called @FREPAP_, which is listed as one of the 20 most mentioned.

Susan Tineo denied that the party had official accounts on Twitter or Facebook, and added that they were investigating the identities of the people behind these accounts. Tineo said that they are currently coordinating the implementation of the channels they will use on the social networks to inform the party’s decisions.

This virtual confusion happened during a very anticipated moment in the last twenty years for the party founded by Ezequiel Ataucusi as recent official tally data place the party in second place among the political forces of the new legislative period. On that regard, Jorge Acevedo Rojas, a specialist in political communication and a professor at the Pontifical Catholic University of Peru, explained to OjoPúblico that the lack of a reaction from Frepap to the wave of accounts that claim to be their official channels is a potential weakness, since these accounts can distort their proposals and the group’s media identity.

Acevedo said this could be happening due to Frepap’s scarce presence and political experience in the last years, as well as the fact that their communication is focused on the construction of physical social networks, communities and direct links.

It could be a mistake not to communicate, talk or learn about the other sectors of the media. On the other hand, it is also wrong to distort Frepap’s identity or goals, or of those who might make it to Congress”, said Acevedo, referring to the reactions of analysts and journalists to the results obtained by the group. 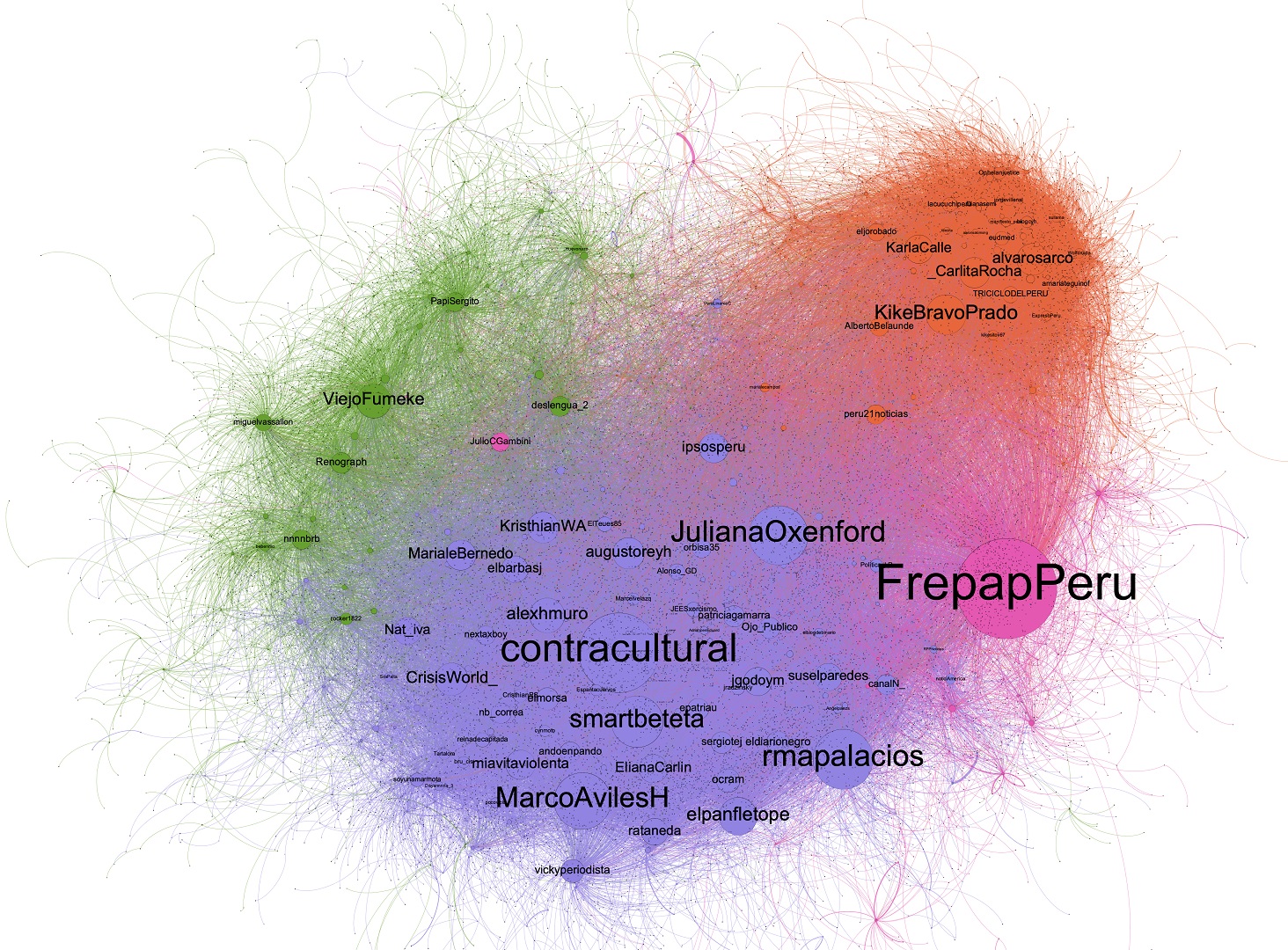 To analyze how the debate was formed around Frepap’s return to the Parliament, OjoPúblico collected data from Twitter about the topic and obtained a total of 80 thousand interactions among tweets and retweets corresponding to January 26 and 27. The data was processed with Gephi, a software for network visualization, which enabled us to establish that 4 communities were formed in the discussion about the topic.

COMMUNITIES. This is how the communities were formed around the discussion about Frepap on Twitter: four distinct groups with well-defined positions.
Visualization: Gephi / Source: Data collected on Twitter.

OjoPúblico also contacted the administrators of the account @FrepapPeru to ask for details about their relationship with the party. Although they did not identify themselves, the administrators indicated through a direct message that “there’s an internal, private issue inside the party which we must resolve in order to make this account official”. Without going into more detail, the author of the message said “the other accounts are completely fake and none of the members have any connection with them”.

Notably, with only three days on Twitter, the profile with the most impact on Frepap has more followers (21,900) than the accounts of some of the parties who made it through the “valla electoral” (a requisite that limits the participaton of political groups in the Congress if they do not reach a certain percentage of votes), such as Acción Popular (8,578), Alianza Para el Progreso (7,013), Podemos Perú (359), or the Partido Morado (6,209).

This is the third analysis carried out by OjoPúblico for the Digital Democracy Room project, a regional initiative for monitoring the public debate on the social networks in Latin America promoted by the Department of Public Policy Analysis of Fundação Getulio Vargas in Brazil, in partnership with the Argentinian communication vehicle Chequeado and the Colombian organization Linterna Verde.