#DebateEnRedes: With almost 14 million tweets around the world, Twitter users have given their opinions on the crisis between the USA and Iran

On Thursday night, January 2, some information was shared on Twitter about an event that put the international politics, especially the conflict in the Middle East, in the foreground. Users mentioned the drone strike ordered by the USA to a car nearby the Iraqi airport of Baghdad, which killed the general and head of the Iranian intelligence Qassem Soleimani.

Chequeado registered – via Trendsmap – the impact of this topic on Twitter around the world. Unlike other analyses, we included in the study terms in English and in Spanish. From Thursday, January 2 at 5:00 p.m. until Monday, January 6 at 10:00 a.m., 13,782,000 messages were registered, of which 43% were published in the United States, 10% in France, and 7% in Brazil. About 13,800 tweets were shared per minute. 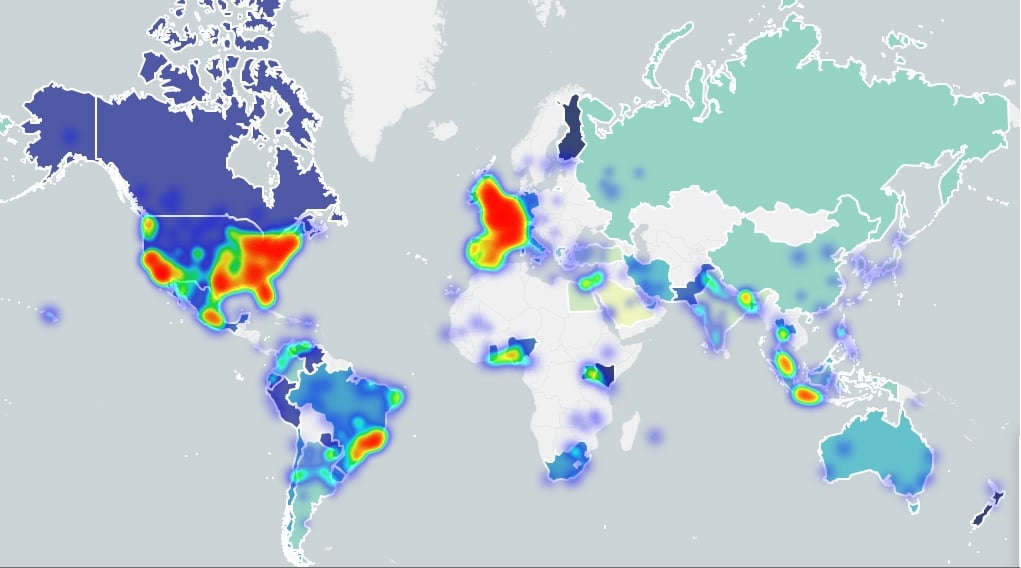 True to his style, Donald Trump used his Twitter account to confirm the United States’ position. Last Friday he published a tweet with the image of his country’s flag without any text. It was read as a confirmation of the fact and was the most replied message in the period analyzed. On January 3, the president was more explicit and said: “General Qassem Soleimani has killed or badly wounded thousands of Americans over an extended period of time, and was plotting to kill many more…but got caught!”.

During the weekend, the threats between Washington and Tehran continued. Hossein Dehghan, military adviser to the Iranian religious leader Ali Khamenei warned that, in response to the death of Soleimani, USA military sites would be attacked (see here). Trump retweeted in his Twitter account with a sequence which said that the United States had targeted 52 Iranian places, “some at a very high level & important to Iran & the Iranian culture”, which could be hit “very fast and very hard”.

In addition, humor was present in the narratives that circulated in the network. Of the four most shared messages on Twitter, one was official and the other were jokes alongside videos.

The top-ranked message was published by the user @BronAndBrow, who has 5 thousand followers and has been active since 2012. The message referred to the selection of soldiers with the best aim for a possible third world war. He added a video of a person missing several balls in a basketball basket, indicating his supposed attitude during screening tests.

The other two humorous tweets came from accounts explicitly stating they were in the United States. In third place in terms of number of shares, there was a recording of a person coming out of a coffin and starting to dance the choreography of Michael Jackson’s Thriller. “Them shipping my body back to the US after I faked my death #WWIII,” @akaRJaay added. In the fourth message, @Iam_Dreamzz shared an edited video of a police practice in which a member cannot throw a grenade at something that is centimeters away from his team. “Me on my first Mission at World War 3 #WWIII”, he joked. This user has 322 followers and his location says: “Possibly Iran, very soon”.

The official message that integrates the ranking of most shared tweets was in second place and was published by the American secretary of State Michael Pompeo (@SecPompeo) in the morning of January 3. From his verified account, he shared a video of a group of Iraqis and mentioned: “[they are] dancing in the street for freedom; thankful that General Soleimani is no more.” This message was retweeted more than 60 thousand times and received almost 185 thousand likes.

In France, the four most influential accounts on the topic (a variable measured by the number of followers) belonged to the communication vehicles Le Monde, AFP (Agence France-Presse), France 24, and 20 Minutes. The French President Emmanuel Macron stated he is aligned with the United States and showed “his concern regarding the destabilizing activities of the Quds force under General Qassem Soleimani” and tweeted about this topic. No French term or hashtag was included in this study; therefore, there may be more tweets about the event than those reported here.

In case of Brazil, the hashtag “#BolsonaroFicaCalado” (Bolsonaro, shut up) was a trending topic. The users included it to ask the Brazilian president not to pronounce himself about the conflict. However, in an interview with Brasil Urgente, Jair Bolsonaro stated about Soleimani: “He was mainly concentrated on terrorism. And we, here in Brazil, our position is very simple: what we can do to fight terrorism we will do.” In this analysis, Chequeado registered that the hashtag mentioned was the sixth most used in the world (it was included in 1.2% of tweets).

Argentina was not exempt from the concern with the international tension. The Minister of Foreign Affairs, Felipe Solá, used his Twitter account to approach the topic. He said that the Argentine government is observing the situation in the Middle East “with great concern” and asked the countries in conflict to “make an effort to contain the tension” and seek a “peaceful solution”.

This statement was officially presented by the Ministry of Foreign Affairs. By means of a notice, the ministry emphasized the desire to favor “the path of negotiation and diplomacy to resolve conflicts”. Similarly, during the weekend, president Alberto Fernández ordered the protection of American diplomatic facilities and airlines in Argentina.

The most mentioned message in Argentina was Trump’s tweet with the US flag, and, similarly to the global results, jokes were among the most retweeted messages.

For example, the most shared tweet belonged to the user Iván Nicolás (@ihasen), a photographer of Paraná (Argentina) with 299 followers, who has been on the network since February 2012. In his post, he recalled the match result in which Argentina gained a 1×0 win over Iran in the group stage of the 2014 World Cup and said: “Oh, no! I hope they don’t remember”. It was retweeted almost 5,500 times. The account @Eliasocampo01 (active on Twitter since 2018) posted the second most retweeted message: he shared a video of the singer Mala Fame asking to separate two people who were fighting during the presidential inauguration celebrations of Fernández in Plaza de Mayo. He edited: “Argentina trying to separate Iran and USA #3raguerramundial”, which was retweeted 2,806 times.