#DebateEnRedes: The “#Nisman case” series revived the discussion on Twitter about the cause of his death

On the first day of the year, the streaming platform Netflix release a documentary about the “Nisman” case. It is called “El fiscal, la presidenta y el espía” (The Prosecutor, the President, and the Spy); it was made by English journalist Justin Webster and has six chapters. In the morning of Monday, January 19, 2015, the prosecutor Alberto Nisman was found dead in his apartment in Puerto Madero with a gunshot to the head. On that day, he was supposed to go to the Congress to explain his accusation of covering up the attack by the AMIA (Asociación Mutual Israelita Argentina) on then president Cristina Fernández de Kirchner and chancellor Héctor Timerman.

The “Niscam case” took over the press and included opinions of spies and cross-accusations between Kirchnerism and the opposition, who were debating theories on whether the case was a murder or a suicide.

Chequeado analyzed the recent repercussion that this topic had on Twitter since Wednesday, January 1st at 8 a.m. (the day the documentary was released) until 24 hours later. 58,500 messages were shared regarding the documentary and Nisman, of which 82% were retweets.

Note elaborated from data obtained through Trendsmap on the interactions on Twitter, from January 1st at 8 a.m. until January 2 at the same time.

Among the hashtags used in the conversation, #nisman” (13.2%) stood out. With a much lower percentage, the next hashtag in the ranking was “#18EconNismanNo” (“No to January 18 with Nisman”, with 2%), which was used to call a rally at the Plaza del Vaticano on January 18, five years after the prosecutor’s death, to “defend the investigation” (see here and here).

It was followed by “#netflix” (1.3%), which was also included as a word in 22% of the tweets, and “#renunciafrancisco” (“resign, Francis”, with 0.7%) and “#popefrancisresign” (0,6%). These two hashtags related to Pope Francis connected the present topic to others, such as the spread of a video where a woman tries to seize the Pope’s hand at Saint Peter’s Square, to which he reacted slapping her hand to make her release him (for example, see here and here). It is common on Twitter for some users to use more than one hashtag in order to give their messages a wider reach.

In addition, 10% of the messages contained the name “Alberto”. It is important to mention that in one of the chapters of the series, the current president Alberto Fernández states: “To this day, I doubt he committed suicide”. His participation in the documentary was recorded in 2017. In an interview to the Rádio 10 on January 2, the president said that, since 2017, “no evidence has come to light telling us that Nisman was killed”, but that “absurd evidence came to light, contradicting elementary principles of world criminology”, regarding the Gendarmaria report.

The two most retweeted messages were published by very active accounts who are close to the Juntos por el Cambio. The first was posted by the user @atlanticsurff. He said: “I’ve watched the Nisman documentary. Note that the legs of someone who’s committed suicide are never extended, because it’s the first thing that bends due to carrying their own dead weight. What was the position of Nisman’s legs? Extended. We’re being governed by a mafia. That’s it”. He got 6 thousand retweets and more than 20 thousand likes.

He was followed by the tweet shared by Ulises Chaparro (@VivirporBoca). He said: “Am I the only one who’s feeling catatonic after watching the Nisman documentary on Netflix? I still can’t believe how you could have voted for this bunch of murderers again. Because that’s what they are: murderers”. He got 3,300 shares and 10,400 likes.

On the other hand, the most active account (in terms of mentions, replies and retweets) belonged to journalist and lawyer Pablo Duggan (@pabloduggan), author of the book “¿Quién mató a Nisman?” (“Who killed Nisman?”, 2018), in which he depends the suicide theory. Between January 1st and 2, the journalist published around 50 tweets and retweets related to the Nisman case and the release of the documentary.

If we look at the way users relate to each other, we can see separate interactions between those who believe Nisman committed suicide and those who claim he was murdered. Regarding the first group, there was a community led mainly by Duggan. Regarding the second group, there were two separate but close bubbles: on one hand, users who commented around the accounts connected to the Juntos por el Cambio, such as @atlanticsurff and @VivirporBoca; on the other hand, the most influential account belonged to journalist Luis Gasulla. 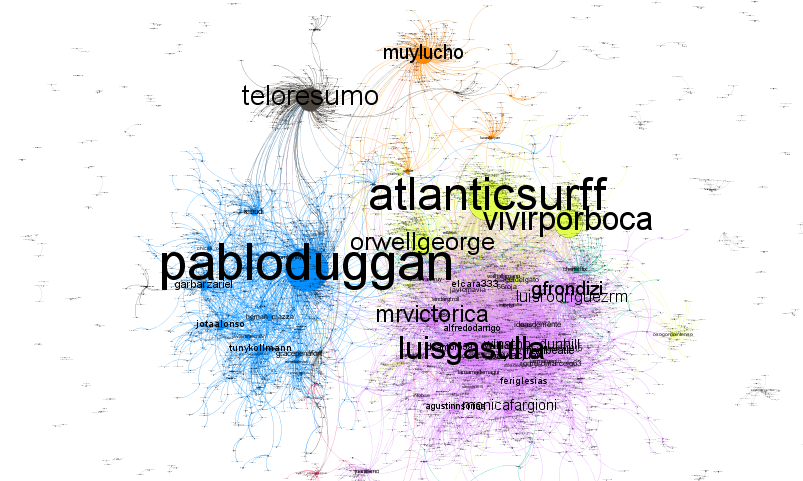 Source: elaborated by Chequeado based on data from interactions on Twitter.

A fourth community, located a bit closer to the bubble led by Duggan, commented around the account @teloresumo, which published the tweet with the most replies and the third most retweeted in the period analyzed. He jokingly said: “The counter documentary on the Nisman case is coming, where they’ll show everything, just the truth, no lies”, and got 2,500 retweets and almost 20 thousand likes. The comment referred to the video of a woman in a march organized in 2017 to demand clarifications on the prosecutor’s death, when she said those sentences which became viral. The account @teloresumo was the third most mentioned in Argentina in 2019, according to the Twitter statistics.

The online discussions about Nisman are not new. In 2015, Ernesto Calvo, associate professor of Political Science at the University of Maryland, analyzed the interactions about the topic and concluded that “the interest communities who tweet and retweet the #Nisman case are intimately connected to consolidated political communities, to political parties and their electors, to recognized journalists, to mass communication vehicles, to political operators and professional bloggers” who “think alike [and] tweet together” (see here).

Discussion of Journalists in the channel Todo Noticias (TN)

Due to the release of the documentary and the ensuing revival of the debate about Nisman’s murder or suicide, the journalist Lorena Maciel became a trend on Twitter in Argentina due to the opinion debate she had in the channel Todo Noticias (TN) with her friend Adrián Ventura, which was also joined by Guillermo Lobo.

In a conversation with Lobo, Ventura said that Nisman “showed up dead” before going to Congress, and emphasized: “When I say ‘showed up dead’, I mean on purpose”. Maciel noted that the “Court’s” investigation defended that “everything indicates that he took his own like” and that “there were no elements to think about a murder”. And she added: “Neither your, nor Guille or I are judges, so we can’t say ‘Nisman committed suicide’ or ‘Nisman was killed’”. The discussion lasted a few more minutes until Lobo ended the discussion.

According to Trendsmap, the discussion generated 6,600 tweets from 10:30 a.m. until 5 p.m. today. The most retweeted message was a criticism to Maciel made by the user @vascoechaza1, who has more than 6 thousand followers and states in his biography: “Communist and its varieties are rejected in the entire planet, capitalism is the predominant system, becase individuals are not altruistic by nature”.

In his tweet, he stated that Maciel “has just squashed Ventura live” and that “it’s no coincidence that the presenter’s husband [referring to the journalist Gerardo “Tato” Young, the author of books about the country’s intelligence services] continues to say it was a suicide”, among other things. He got 522 shares and 742 likes. It was followed by a tweet by Duggan, in which he said: “The quilombo armed itself at the TN with the Nisman documentary. There are many who don’t believe the lies anymore!!!”.