#DebateEnRedes: Economy and Finance was the most commented topic on Twitter about the first presidential debate, and Macri was the most mentioned

The thematic blocks were arranged between an Advisory Council of the electoral body and the candidates’ campaign teams. The themes were divided randomly between the two scheduled debates, the one which happened last week and the one happening today at 9 p.m. The first debate included International Relations; Economy and Finance; Human Rights, Diversity and Gender; and Education and Health. The candidates had two minutes to present their positions regarding each topic, 30 seconds for responses, and another 30 seconds to conclude their participation in each theme.

Brandwatch was used to analyze the behavior of Twitter users. It is a tool that gathers selected parameters (see chart) and builds a sample of 20%, in which it is possible to cross variables such as mentions to the candidates’ names or to the topics, among others.

The hashtags, the use of keywords and the statements helped observe which subthemes unfolded on Twitter from the debate topics; that is, which aspects were talked about the most on the network.

Not considering individual candidates, the words, hashtags and phrases which ranked the highest inside the Economy and Finances block were “#debatear2019”, “economía”, “deuda”, “#debatepresidencial” and “#macripresidente”. As the debate unfolded, the economic policy of the current administration, particularly the debt issue, was the target of criticism from the opposing candidates, while Macri considered that “problems we’ve been dragging on for decades” had been resolved. Graph elaborated based on Brandwatch – Economy and Finance topic

Regarding the Education and Health theme, the words, hashtags and phrases which ranked the highest were “#debatear2019”, “educación”, “abuelos”, “Espert” and “#macripresidente”. During this portion of the debate, the clash between Macri and Fernández regarding the “abuelos” (grandparents) and the use of mobile phones had the highest numbers. The candidate for Juntos por el Cambio said: “Our grandparents can even have prescriptions on their phones”; to which Fernández replied during his final 30 seconds: “Oh, President, President, our grandparents don’t even have phones, President. They don’t have enough money to buy them”. 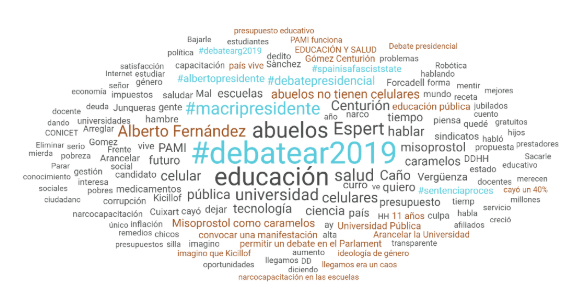 Graph elaborated based on Brandwatch – Education and Health topic

Lastly, in International Relations and Human Rights, Diversity and Gender, some terms shared on Twitter such as “Venezuela” and “Maduro” were the highlight. At different points during the debate, this topic set the tone for the discussion on Twitter. For example, when Macri qualified the Maduro administration as a “dictatorship”: “Former president Kirchner honored the dictator Maduro with the order of San Martín, while we recognize president Guaidó and denounce the violation of Human Rights in Venezuela, because there can be no double discourse in this regard: you are either for dictatorship or you are for democracy, and remaining neutral is to support dictatorship”, he warned.

Fernández, in turn, also made his position clear in his conclusion: “I don’t want to intervene in Venezuela. The president must admit that he is preparing to break relations in order to intervene. I hope, President, that no Argentine soldier ends up in Venezuelan lands”, he stated.

The hashtag #DebateAr2019, promoted by the official account of the 2019 Presidential Debate, was present in all topics, centralizing the conversation on the networks.

Mentions to each candidate on Twitter regarding the first electoral debate

The data refers to the activity on Twitter between Sunday, October 13 at 9 p.m. and Monday, October 14 at the same time. The mentions may be positive (compliments) or negative (criticism).

Source: Elaborated by Chequeado from a keyword search about the presidential debate and the candidates’ names or accounts.
35% of the tweets mentioning Marci were connected to the topic Economy and Finance; this topic was also connected to Fernández, with 39%. Both criticized the inflation, poverty and debt.

The mentions related to Espert and Lavagna were mainly focused on the topic Education and Health. During this portion of the debate, Espert proposed to “charge for the public universities” and grant scholarships to “young people with the best grades who cannot pay for their studies”. This statement earned him 33% of the mentions. Lavagna got 35% of the mentions to his name during a portion of the debate in which his presentation of proposals did not even reach two minutes.

In turn, Gómez Centurión accumulated 46% of the mentions in the topic Human Rights, Diversity and Gender, about which he stated: “I am systematically opposed to any model of abortion law and its legal shortcuts, which are the protocols; a child’s right to be born is a constitutional guarantee, and we will defend this guarantee by vetoing any abortion law proposed by the Congress”.

In addition, in the conclusion of this thematic block, the candidate for Frente NOS said: “None of them speak the truth. They lie by saying that they defend both lives while giving away Misoprostol as if it were candy”.

Lastly, 29% of the mentions to Del Caño focus on the topic International Relations, where he chose to remain silent during his 30-second response time to pay “homage to the workers, farmers and indigenous peoples of Ecuador, who were killed as a consequence of the IMF’s repression”.

Graph elaborated based on Brandwatch – Amount of mentions per topic, per candidate

*This article is part of the Digital Democracy Room initiative, led at the regional level by Fundação Getulio Vargas and in Argentina by Chequeado.

Brandwatch is a tool which uses programming rules to obtain a large volume of data. In this case, a general rule was created for the constitution of the search parameters, including (official and unofficial) hashtags, keywords, the accounts of each candidate and phrases connected with the electoral process and with the presidential debate in particular.

Two categories were also created: candidates and debate topics. Each of them was divided into subcategories (candidates’ names and topics, respectively).

The rules for each category were configured by filtering the names and references of each candidate and their political space, in the first case; in the second case, this was done using terms mentioned in the debate inside each thematic block together with other words and hashtags which were repeated the most inside each block. For example, for the category “Nicolás Del Caño”, mentions to his official Twitter account and to “#FITunidad” were included. For the subcategory “Education and Health”, both terms used in the debate (such as “educación”, “escuelas”, “Baradel”, “docentes”, “CONICET”) and other terms with great repercussion on Twitter, such as “abuelos”, were included.

In all cases, the data was obtained by maintaining the filters for type of page (Twitter), language (Spanish), and time specified for this analysis (from Sunday, October 13 at 9 p.m. until Monday, October 14 at 9 p.m.).

#DebateEnRedes: the hashtag promoted by Lammens was the most popular on Twitter during the debate in Buenos Aires