Ten days after the discovery of Solsiret Rodríguez’ remains, an analysis by the OjoPúblico found that conservative activists from different spheres generated up to a third of the interactions about the case on Twitter, including disinformation and aggressive messages against the victim and against feminist groups who denounced the potential feminicide. Authors and supporters of these messages included former congressional candidates for the Solidaridad Nacional and spokespeople for the more active groups against the gender approach, who deny the existence of violence against women.

OjoPúblico, as part of the Digital Democracy Room initiative, analyzed 51,900 tweets mentioning Solsiret Rodríguez form February 18 to 25, collected using the Trendsmap tool, a social intelligence software which enables the compilation of messages from social networks based on specifically-built search criteria according to the topic to analyze.

The peak of the debate about Solsiret Rodriguez’s discovery happened on February 18 at 10:27 p.m., with 53 tweets per minute. The hashtags mentioned the most often were #Solsiret, #Justiciaparasolsiret (Justice for Solsiret), NiUnaMenos (Not one female less) y #LeySolsiret (Solsiret Law), and, to a lesser extent, – #laviolencianotienegenero (violence has no gender), #elfeminismomata (feminism kills) abd #generoescorrupcion (gender is corruption). The discussion created up to four communities, two of which showed conservative and aggressive opinions regarding the feminist groups to which the victim belonged.

The analysis revealed that these conservative groups produced the two most shared tweets related to the Solsiret case: a video published by the conservative Argentinian writer and activist Agustín Laje, known for his books against gender policies, and a tweet accusing feminists of the crime, published by an anonymous account called Micaela, whose description says: “A white, heterosexual, privileged, conservative woman who oppresses for sport”. However, the reach of interactions with these groups represented only 25% of the interactions on this social network.

In contrast, 64% of the interactions contained messages of support and solidarity to the Solsiret family, criticism to the actions of the National Police and the Prosecution Office in the search of missing women, and messages defending the feminist movement.

Two fronts
The analysis shows that the two communities who sent aggressive messages or disinformation around the case had notably different political positions. On one side was the local community (24.62%), which included users such as the Antifeministas Perú, one of the accounts which has been generating the most tweets about the Solsiret case; the account of the group Con Mis hijos No Te Metas, who posted aggressive messages such as the hashtags #GéneroEsCorrupción and #ElFeminimoMata; and accounts of conservatives such as Jorge de Lama, the vice president of the National Network of Lawyers for the Defense of the Family (Renafam); and Giuliana Calambrogio, the former director of the Education Office of the Archbishopric of Lima and spokesperson for the group Padres en Acción.

This group also included Javier Pacheco, former candidate of the Partido Solidaridad Nacional in the last parliamentary elections, and other candidates of that same political group, such as Alejandro Muñante and Eugenio D’medina Lora, both removed from the race at the time by the National Electoral Court. 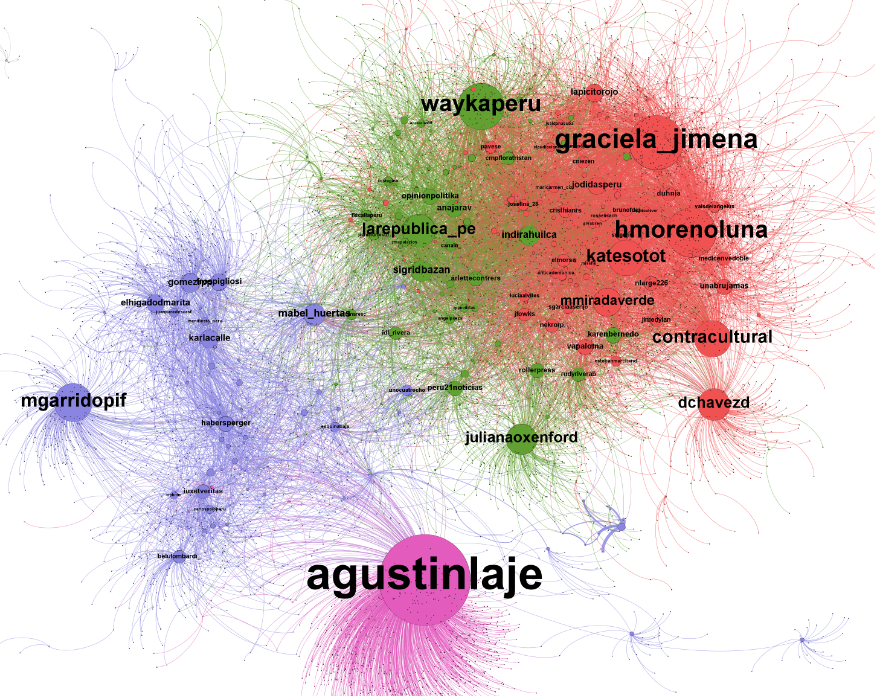 COMMUNITIES. Four groups were formed on Twitter around the case. The conservative activist are in the blue and violet groups.
Visualization: Gephi analysis with data collection from Trendsmap

The other conservative group detected in this analysis (12.28%) was formed around the video messages sent by the right-wing activist Agustín Laje. In it, Laje makes subjective statements about Andrea Aguirre, the confessed killer of Solsiret, and even claims that she is a feminist leader because her interests on Facebook include fan pages of feminist groups. Until today, the video was watched more than 4 thousand times, including by well-known conservative and religious figures such as Alejandro Bermúdez, director of the catholic news portal Aciprensa, and Carlos Polo, Latin America director of the Population Research Institute, an organization that defines itself as “pro-life”. 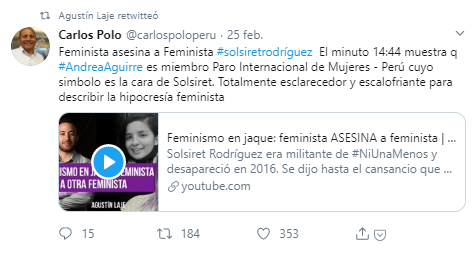 Both communities focused on the supposed feminist ties of the killer of Solsiret Rodriguez based on the pages she followed on her social networks.

“That is irrelevant”, said Angélica Motta, an anthropologist and researcher at the Universidad Peruana Cayetano Heredia on gender and sexuality, who was consulted for this report. “What matters is that this is one person, and people are trying to create an idea about the entire movement based on the actions of one person”,

According to Motta, the discourses reproduced on the social networks with particular emphasis on Solsiret Rodríguez’ murder are discursive strategies aiming to conceal the power relations in the area of gender. “The systemic pattern of this type of violence is that it happens from the male environment to the female environment. Which is not only about men and women”, she said. According to the professor, when talking about gender violence, we must “consider relationships of domination and roles”.

Until the end of this report, aggressive messages continued to appear in the form of direct messages and comments on the Facebook page Buscamos a Solsiret Rodríguez, promoted by friends and relatives of the activist after her disappearance in August 2016. (Note: OjoPúblico received the screenshots of these messages, but did not publish them to avoid contributing to their dissemination).