Attacks as trends. The strategy of the semi-bots

This attack to the president was not a coincidence. It is part of the coordinated actions that start from different political and ideological sectors and try to manipulate and divide the debate on the social networks

Last Saturday, the country woke up with a Twitter trend that referred directly to the private life of president Iván Duque. While voices from all sectors condemned the spreading of the rumor, the hashtag grew in the midst of offenses, speculation and memes.

This attack to the president was not a coincidence. It is part of the coordinated actions that start from different political and ideological sectors and try to manipulate and divide the debate on the social networks. In order to achieve that, the concept of what is acceptable is increasingly confusing.

The disclosure of facts related to the private life of a public servant may be relevant to public opinion. This issue must be analyzed in a case-by-case basis, but must always be based on truthful statements made with journalistic rigor. What we saw this time was the use of a hashtag to spread a rumor, which was considered a fact due to its repetition and used to spread all kinds of offenses and speculation.

With this analysis, we do not seek to amplify an attack which we reject. On the contrary: our goal is to explain it in order to understand how our digital political debate is pervaded by these issues.

The origin of the enthusiasm

The hashtag #LaMozaDeDuque (“Duque’s woman”) reached its peak on Twitter on Friday, November 29, with around 4,400 tweets between 6 p.m. and 10 p.m. Many elements of this trend indicate a potential coordination: first, the sudden interest and singular use of the hashtag; second, the quick activation of several accounts; and third, the large number of interactions in a short period of time.

The sensationalist nature of the message facilitates its amplification, and one might think that it is a spontaneous, almost idle diffusion. In addition, it was Friday night on Twitter, when the tone becomes more relaxed and the protagonists change. However, on the following day, the hashtag was activated once again at 5 a.m., as if a machine had been turned on. It continued until 10 a.m. with the same intensity – turning into an organic conversation – and became more diluted over the day.

Note. Between November 27 and December 3, #LaMozaDeDuque added up to almost 37 thousand tweets (source: Sysomos These are approximate values and may vary).

The hashtag analyzed had been used on Friday night with no important diffusion. However, a week later, at around 6 p.m., @Pelicolombianas used it again and became one of the most active nodes for production and amplification. In the three days when the hashtag was used, @Pelicolombianas accumulated 24 interactions (8 original tweets and 16 retweets), concentrated mostly in the first peak of this conversation. In addition, two of his original tweets reached the top 25 retweets with this hashtag.

Due to the number of mentions it had – retweets it made and received –, @Pelicolombianas was one of the nodes of the conversation. In other words, it had an essential role in amplifying the trend during the unusual hours of movement. 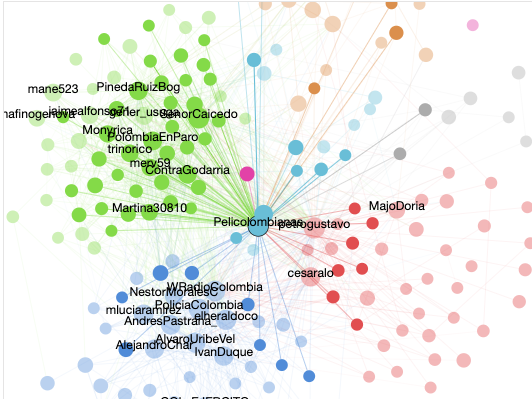 Note. The map of mentions of accounts around the trend, where @Pelicolombianas appears at the center. A mention does not imply that all the accounts were generating content. For example, it is common that celebrities and influencers are mentioned in tweets to attract their attention (source: Sysomos These are approximate values and may vary).

When the trend reached an organic pace – especially during Saturday morning –, voices of different sectors were responsible for amplifying and sustaining it. For example, while the journalist Gonzalo Guillén used the hashtag to elaborate an accusation, the vice-minister of the Orange Economy, Felipe Buitrago, used it to disqualify it as a misogynistic attack.

The user @Pelicolombianas has 57,500 followers and constant activity of Twitter through memes, videos and retweets. His content is often critical of Álvaro Uribe Vélez supporters and of the government, and close to Gustavo Petro supporters. In the last year, we registered more than 1,100 mentions to @petrogustavo in his account – which does not imply a direct relationship with the senator.

These types of users are known as semi-bots or cyborgs. They are apparently human, but have such a high level activity that they could be machines or be at the service of a call-center scheme. They are not always accounts with many followers. The central element is production: some reach 1,600 publications each day, with peaks of over 200 tweets per hour. That is one tweet every 20 seconds.

The semi-bots tend to have a very defined position in the political spectrum and a loyal audience. They speak to those who have made up their minds. Therefore, their capacity for external influence is low, unless they are able to prepare a trend that ends up being amplified organically – such as in this case.

Before this episode, Linterna Verde mapped eleven semi-bot accounts that participated actively on Twitter around the time of the elections in October. We found cohesion and isolation inside the left wing and right wing bubbles. These are accounts that diligently follow and amplify each other. 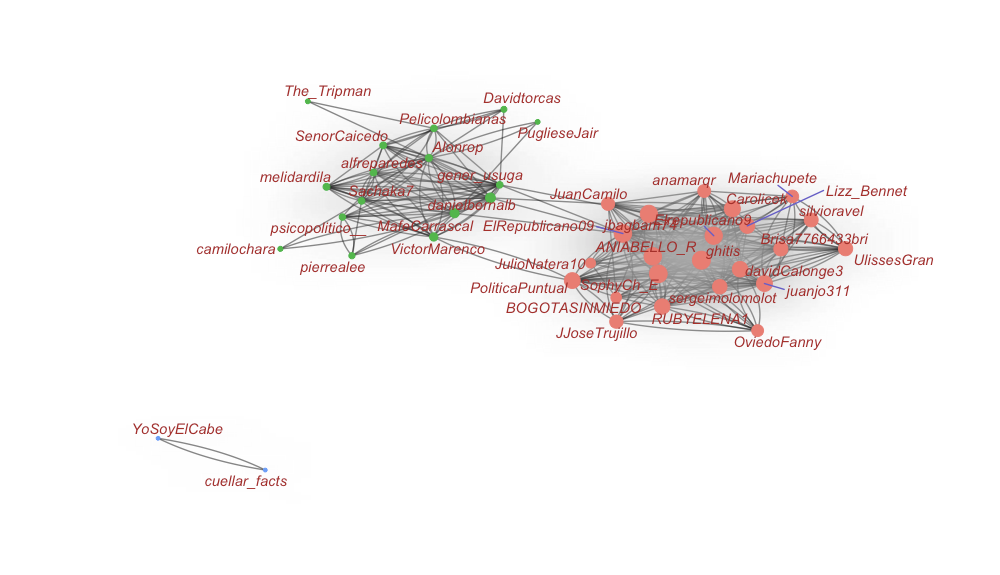 Note. Map of semi-bots from the following accounts. The community of semi-bots in the right wing is more dense than that of the left wing, and their nodes are larger because they are more central in this sub-network. Both are isolated from other communities (source: elaborated by Linterna Verde). Post-publication clarification: this map include both semi-bots and some accounts of opinion leaders and influencers who the semi-bots have in common.

Inside this map of semi-bots in the elections, we found @Pelicolombianas, which indicates that his role in the recent trend against Iván Duque is not new. Similarly, we found accounts of a different ideological positions which used the same strategy to transform attacks into trends. A few days before the episode analyzed, accounts such as @ghitis and @OviedoFanny played a relevant role in the amplification of #PetroMatóADilan (“Petro killed Dilan”), in an attempt to blame the leader of the left wing for the death of Dilan Cruz in the hands of the Esmad (riot squad of the Colombian police). 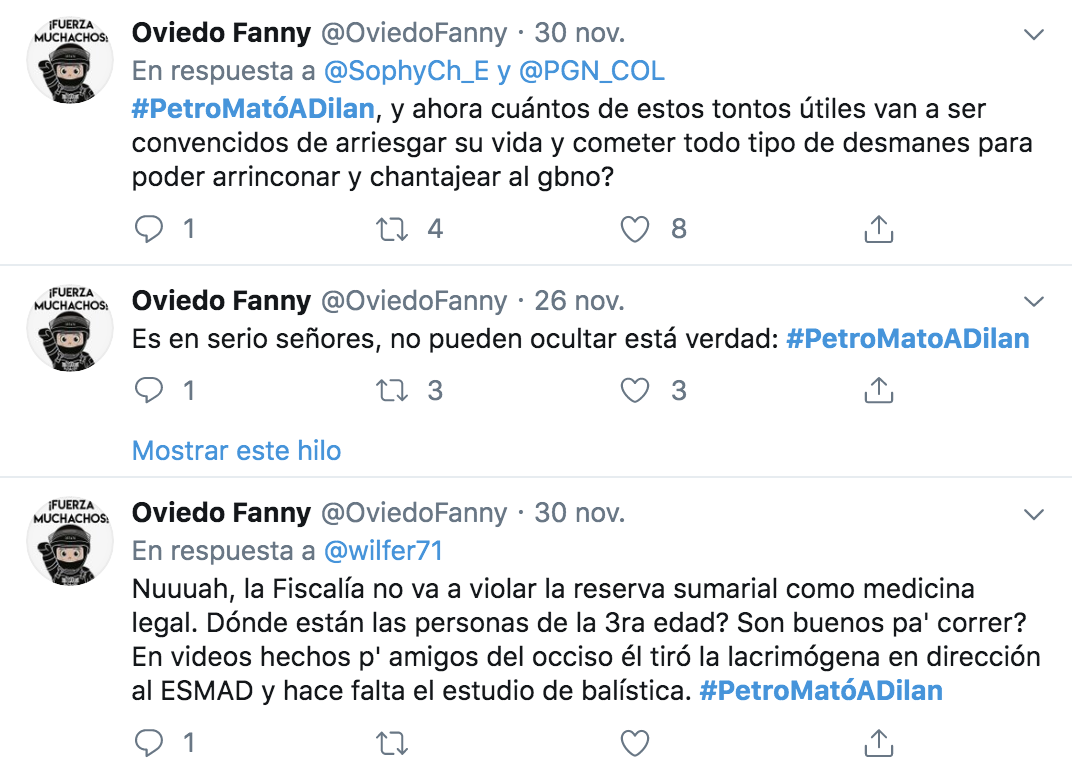 Tweets 1 and 2: Like the time of the seizure of the Palace of Justice, today commander Aureliano sends others to vandalize and incite confrontations while hiding and seeking personal gain. #PetroMatóADilan

Tweets 3, 4 and 5: #PetroMatóADilan, and now how many of these stupid puppets will be persuaded to risk their lives and commit all sorts of excesses to corner and blackmail the government?
|
This is serious, gentlemen, you cannot hid this truth: #PetroMatóADilan
|
Nah, the Prosecution Office won’t violate the confidential trial as a legal medicine. Where are the elderly people? Are they good at running? In videos made by friends of the dead man, he threw tear gas towards ESMAD and ballistic study is required. #PetroMatóADilan

Note. Examples of tweets by semi-bots who promoted a trend against Gustavo Petro.

Due to Twitter’s anti-spam policies, many of these accounts end up being suspended. The repetition of the same hashtag, the mass distribution of messages and undesirable interaction, among other things, are elements that are taken into account in their evaluation. But it is not easy. At first glance, the difference between these orchestrated actions and those of a public campaign, for example, is not always clear.

The truth is that the semi-bots are not exclusive to any political group. Neither are they an uncommon phenomenon in the debate on Twitter. From several sectors, political leaders and influencers use these accounts to amplify their message, either directly, through retweets, or dictating the terms of the conversation that these users later replicate. The trend has become an attack. And the attacks are now a trend.