In the last days of the electoral race, the main leaders of the Partido Morado were criticized for being involved in two controversial events: a domestic violence report and a confusing fire in the district of Miraflores. OjoPúblico analyzed the debate on Twitter around these cases, which pointed to the candidate Daniel Mora and the leader of the party, Julio Guzmán, and established that, resulting from these cases, both characters generated 316 thousand interactions in peaks that caused an impact on social networks over the electoral campaign. The main peak was related to the discussion on gender violence.

This analysis, which was carried out through the monitoring tool Trendsmap, led to the collection of a universe of 283,800 interactions (tweets, retweets and replies) associated with the discussion on Twitter about violence against women from December 3, 2019 – the last day for releasing the candidate lists in this process – until January 20, 2020. This sample included topics such as sexual abuse, aggression, feminicide and other crimes against women, which were registered in the last few months.

In this period, the domestic abuse report made against the former Congress candidate Daniel Mora, the coverage of the feminicide of Jessica Tejeda, and the criticism of the Minister of Women, Gloria Montenegro, due to her statements on the alarming numbers of sexual violence were the highlights of the discussion on the social networks about the topic according to a research carried out for the Social Democracy Room, a regional initiative for monitoring the public debate on the social networks in Latin America promoted by the Department of Public Policy Analysis of Fundação Getulio Vargas in Brazil, in partnership with Chequeado in Argentina, Linterna Vede in Colombia, and OjoPúblico in Peru.

However, the controversy sparked by the report of violence made against Daniel Mora was proportionally bigger than the controversies created by the other events. Last Tuesday, January 16, the accusation made by Mora’s wife generated 53,200 interactions on Twitter in a single day. This number is more than 12 times higher than the number of interactions registered in the same period due to the news of the feminicide of Jessica Tejeda (4,300 on December 22), a woman who was murdered with her three children by her then partner in the district of Agustino.

PANORAMA. The peak of the discussion on violence against women happened last Tuesday, January 16, after the presentation of a domestic violence report against the former minister Daniel Mora.
Visualization: OjoPúblico via Brandwatch

It is important to note that, at that time, there was a peak of discussion when the Minister of Justice, Ana Teresa Revilla, preferred not to comment on that tragedy in the midst of the Christmas celebrations. This reaction corresponds to an equally important statistic: the year of 2019 ended with 167 feminicides, the highest rate in the last decade, according to the Ministry of Women.

According to the analysis by OjoPúblico, Mora’s case was discussed eight times more than the controversy that arose when the minister of Women and Vulnerable Populations, Gloria Montenegro, said the sentence “Peru, a country of rapists”. The discussion about this sentence reached a peak of 6,500 interactions on January 10, 2020.

Until the report, the party Solidaridad Nacional held the highest peak of reactions generated by a controversy in the 2020 campaign for the Congress, with 64,200 interactions in a single day, prompted by gesture of racist connotation made by the candidate Mario Bryce against the candidate Julio Arbizu.

2020 Elections: Controversies of the Partido Morado
In a little more than a week, the interactions about the two controversial events by the Partido Morado surpassed the debate about racism involving the parties Solidaridad Nacional and Juntos por el Perú.

OjoPúblico carried out a specific analysis of Daniel Mora’s case with the Trendsmap tool and found that his wife’s report generated a total of 203,200 interactions between January 15 and 20, 2020. The monitoring of the network revealed that the first tweet about the topic was published on Wednesday night, January 15, by the candidate Javier Pacheco of the party Solidaridad Nacional. Pacheco was one of the subjects of a sanction process by the National Electoral Court (JNE) for transmitting a controversial video by this party which presents many of their political rivals together with terrorist elements.

In the following morning, the report was published by the APRA candidate José Pimentel, who made appearances in television programs with the proposal to revoke the resolutions of Sunedu (the National Superintendence of University Higher Education) on university licensing, a topic promoted especially by Mora.

In the following hours, the report started spreading with more impact and reach through the accounts of persons and political groups in the electoral race such as the Partido Aprista, Solidaridad Nacional, and Contigo, as well as news pieces by the media.

Using the Trendsmap and Gephi tools, OjoPúblico found that two communities were formed during this period, rejecting and questioning the report against Daniel Mora. An analysis of the main authorities in each group (the name given to the most retweeted users) shows that one sector used criticism and the other sector used attacks to refer to the issue. The latter, according to the statistic comparison, had a higher amount of content shared (retweets) from January 15 to 20, 2020.

FILTERING. On January 15 at night, the Congress candidate for the Solidaridad Nacional published the aggression accusation against the former minister Daniel Mora.
Photo: screen capture of Javier Pacheco’s account on Twitter

On Friday, January 17, the former minister Daniel Mora was interviewed by the RPP Noticias in order to reply to his accusations. As part of his defense, he said it was a family matter, denied assaulting his wife, and called Julio Guzmán disloyal due to the declaration by the Partido Morado demanding his removal from the electoral race. A total of 43,900 interactions were observed that day. Women represented 28% of the discussion, and men represented 72%.

Two days later, on Sunday, January 19 at night, Daniel Mora’s wife ratified her report in all its aspects. “I’m not trying to hurt anybody, but I’m exercising my right to affirm that everything I said in my manifest is true”, she said in a news program. The declaration generated a peak of 27,300 interactions.

Because of these facts, Mora went this week to the 3rd Office of the Attorney General, which specializes in crimes of violence against women, as part of a preliminary investigation. Afterwards, he gave an interview in which he avoided commenting about taking office in case he was elected as a congressman.

Last Friday, his case became more complicated with the publication of a paternity claim against him. Through his official account on Twitter, which was kept suspended for several days, Daniel Mora replied that this was invented by a sector of the press to harm him. Until the conclusion of this edition, this new incident had generated 3,400 interactions on the social network.

Last Sunday, the news program Panorama broadcast a video in which the leader of the Partido Morado appeared running away from a fire inside a building where he was having lunch with a member of his party. While this news report was airing, Julio Guzmán was simultaneously being interviewed in another program to give an explanation. The publication and the replies of the people involved produced a total of 69,700 interactions about the topic between January 19 and 20, 2020 and remained a trend on Twitter during that period. In a single day, the incident generated 22,700 interactions with satirical comments, attacks and questions.

According to the data analyzed with the Trendsmap and Gephi tools, the discussion of the case divided those commenting on Twitter into at least three main communities: the first one garnered 37.81% of the users; the second one, 38.70% of the users; and the third one, 23.31% of the users. 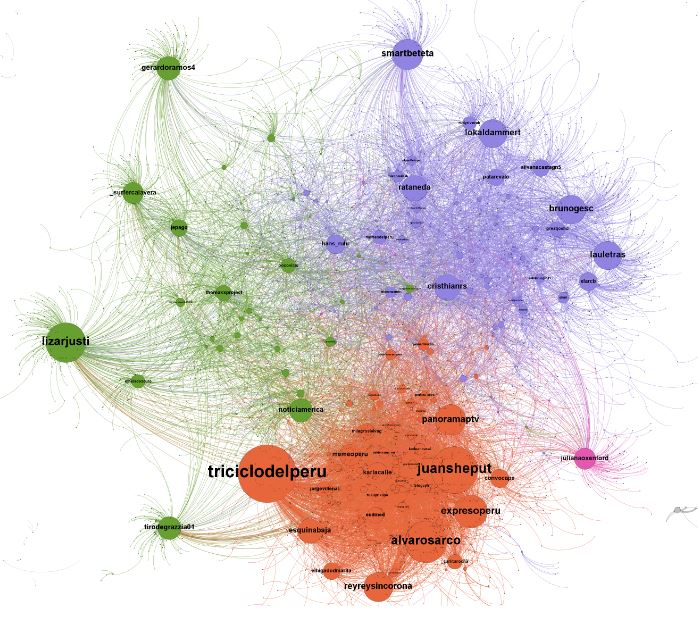 NETWORKS. Three communities were formed on Twitter after the incident with Julio Guzmán, publishing satirical comments, attacks and questions.
Visualization: OjoPúblico via Gephi / Source_ Trendsmap
The incident with Julio Guzmán put his party in the eye of the storm. According to Trendsmap, between Monday, January 13 and Monday, January 20, the political group generated 316 thousand interactions with episodes that range from Guzmán’s controversial statements about supposed “extreme feminist” groups to his notorious absence in the press conference in which his party revealed their official position regarding the violence report against Daniel Mora. In his place, the secretary general of the Partido Morado, Rodolfo Pérez, stated that the group had no knowledge of these accusations and publicly demanded Mora’s resignation.

One of Guzmán’s last declarations on Twitter demanded the resignation and removal of the former minister Daniel Mora, but he did not make any comment about his own case.

On the other hand, the president of the Special Electoral Court (JEE), Luis Carrasco, said that the Partido Morado did not submit Daniel Mora’s resignation request properly. In a conversation with RPPNoticias, eh said that the party did not comply with the attachment of the minutes correctly to make this request official. In addition, the former candidate Daniel Mora did not formalize his resignation with the National Electoral Court. In other words, he is still in the race for the Congress elections this Sunday.

The analysis is available the website of Ojo Público here.